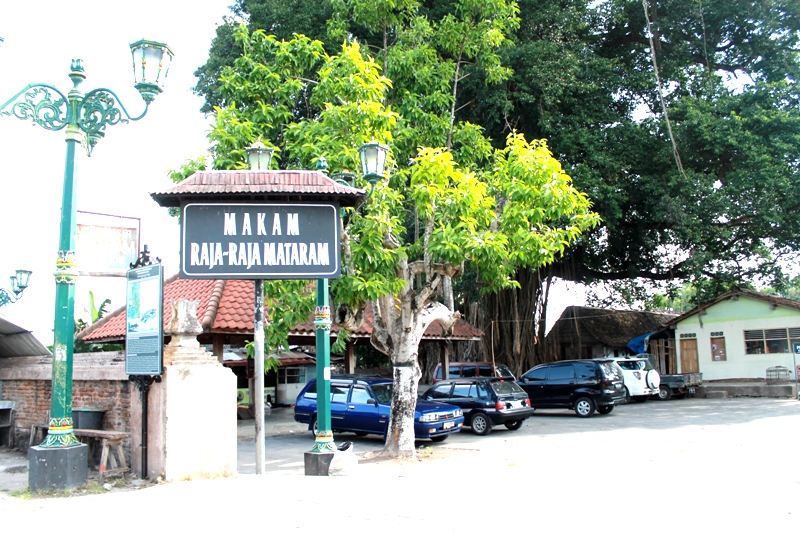 Jogjakarta, one of the special provinces in Indonesia, is popular for tourists who want to see the world’s largest Bhuddist temple Borobudur or the Kraton Palace.  If you come to Jogjakarta City, say, five years ago, you will be surprised now to see the fast growth of concrete buildings and business in the city. For some way or the other, the development starts to loose the soul of the city.

If you miss a slow pace, kampong like area unloaded with mass tourists, try to visit Kotagede, a district about six kilometer in the southeast of Jogjakarta City, in Bantul District. Despite its traditional atmosphere, there you can still enjoy fine dining in fancy traditional Javanese restaurants, shop the souvenirs–Kotagede is the center of  handmade silver crafts, see the local village and visit some local and historical sites. 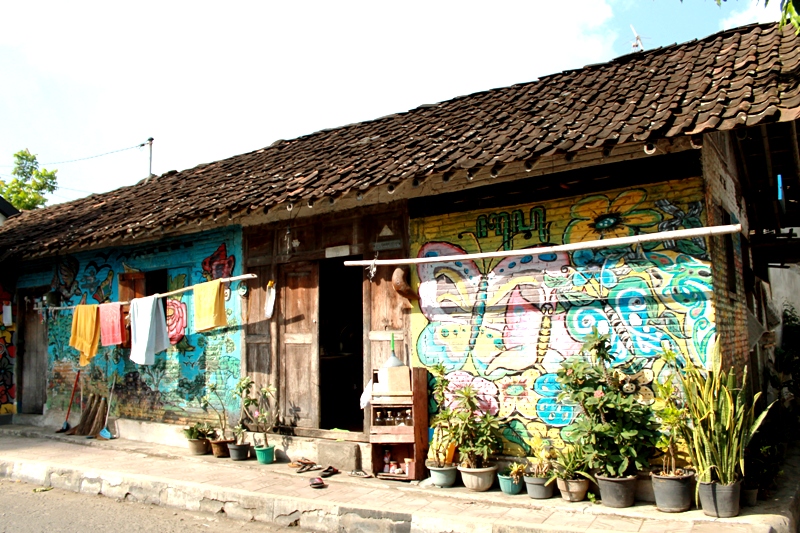 A residential house in the village of Kotagede

The name Kotagede originates from Kutha Gede  of Javanese language which means big city.  Its other name is  Pasar Gedhe  (grand market) and it is shortened  Sargedhe. When the town was first established by Ki Ageng Pemanahan and his son Penembahan Senopati (Raden Sutawijaya) in the 16th century they first  built  the market to attract the people to come. Penambahan Senopati (1584–1601) is the first king of  Mataram Sultanate who made Kotagede the capital of the Sultanate. His title is Senopati ing Alaga Sayiddin Kalifatullah Tanah Jawi.

The city of Javanese kingdom is arranged based on four elements: the palace/kraton as the residence of the Sultan and the center of government, market as the center of business, square as public space where the King and his people could interact and place of worship.  The four elements represent political, economic, social and spiritual affairs that should be present in a city. Those elements  are independent but interconnected, therefore it is called Catur Gatra Tunggal (a one  four-dimension). 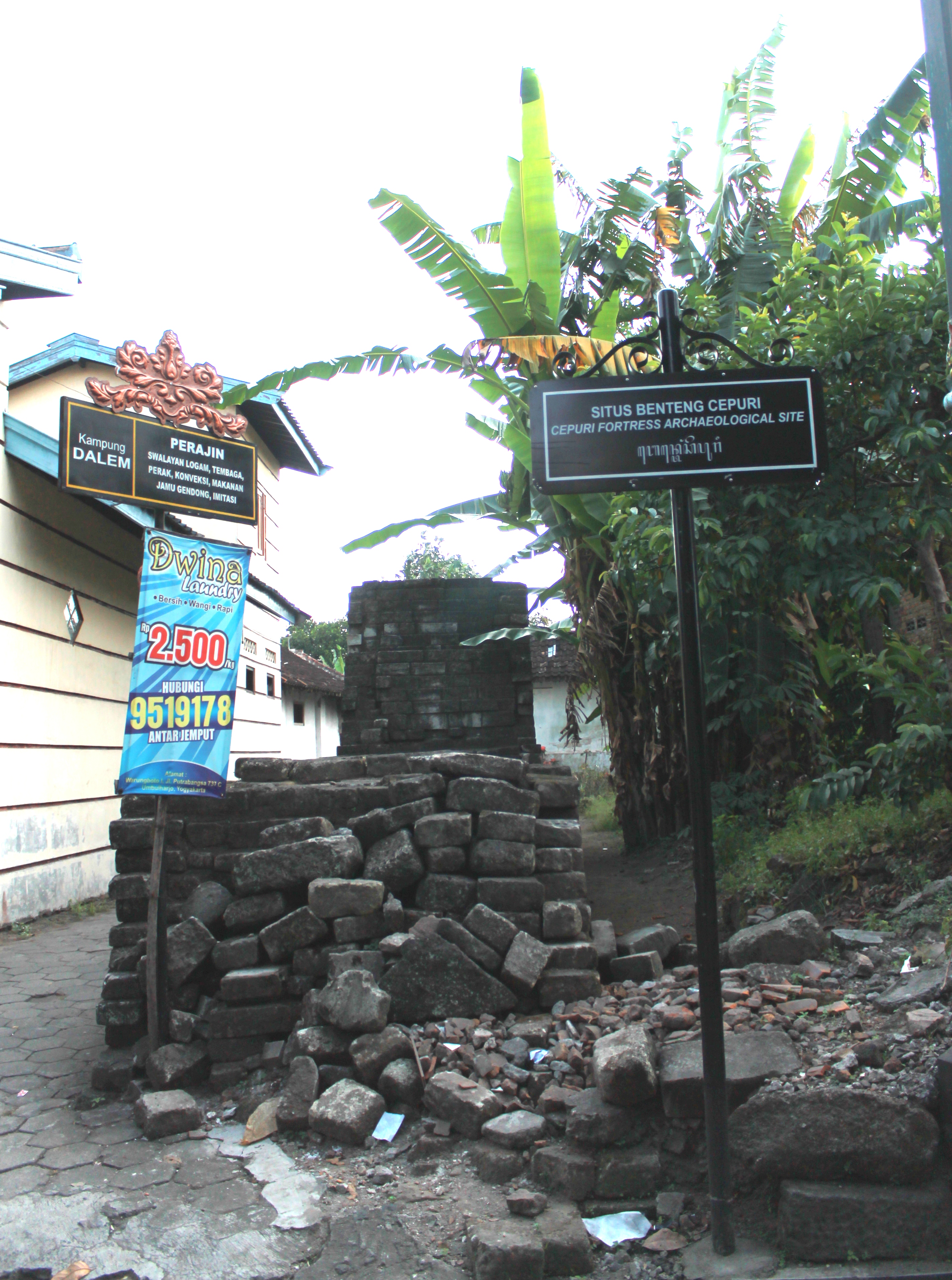 Cepuri is the wall/fort that border the Palace Complex of Mataram Sultan with the area outside the palace. Only remnant of the wall can be seen today.

The Palace complex which is called Dalem Kraton is no longer there. Now the area  of former palace complex is called Kampung Dalem,  a neighborhood for the local residents. 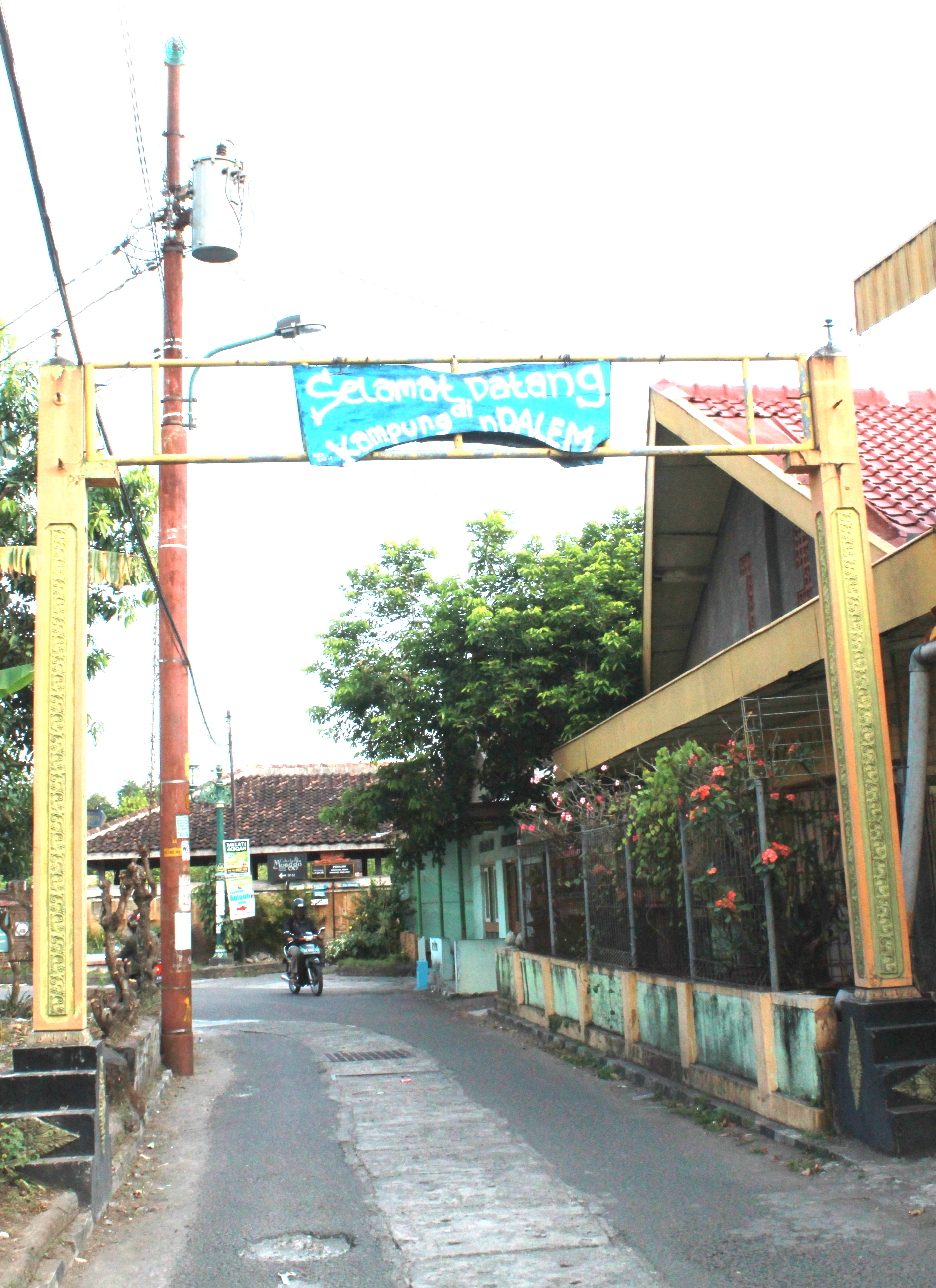 Kraton Dalem is no longer there. The site is now a village called Kampung Ndalem.

Ndongdongan area comprises of the mosque complex, the complex of the tombs and sendang selirang. The gate to enter this complex is influenced by the Hindu architecture. The main gate which is called gapura paduraksa leads to the mosque courtyard and the way to the complex of tomb. 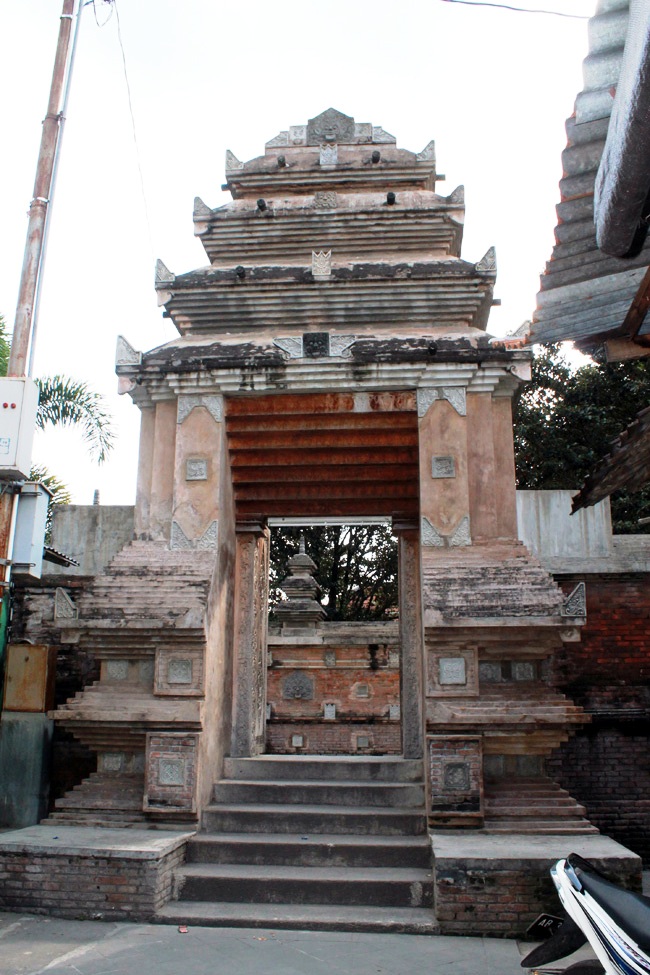 Penembahan Senopati also built a mosque. He built the mosque in 1587 from the selected teakwood. The current mosque is the expansion of the original mosque and it is called  Masjid Agung Kotagede, which is the oldest mosque in Jogjakarta.  The mosque situated in Ndongdongan area, a complex of  mosque,  the tombs of  Mataram royals and Sendang Selirang. Ndongdongan area is surrounded by a wall which is 2.5-meter high. 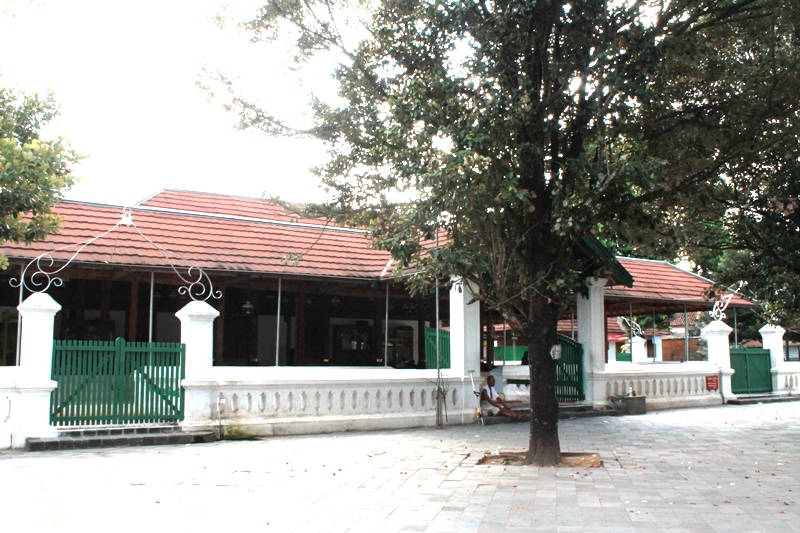 Masjid Agung Kotagede that has been expanded from its original.

The Complex of the Tombs

There are three gates to be passed to reach an area where Sendang Selirang and the complex of the tomb is situated. In the area, there are open houses (pendopo) for the caretakers of the complex and for visitors who want to meditate.

The gate to the complex of the Royal tombs and Sendang Selirang.

Visiting the complex of the tomb

I visited to the tomb complex on one Sunday. I had to change my dress to the Javanese  dress. I should dress in traditonal Javanes dress for women. A guide wearing Javanese dress accompanied  me to go inside the complex of the tomb. He took off the shoes and unlocked the big gate. My naked feet followed his steps him from behind. Inside the complex  there are many tombs of the family of Mataram Sultanate. The tombs of important royal members such as Ki Gede Pemanahaan, Panembahan Senopati (Raden Sutawijaya), Sultan Hadiwijaya (Sultan of Pajang) are located in a house. I stepped into the house. It was dark inside and I smellt an incense aroma.  The guide me led me to the tomb of Panembahan Senopati. There was an offering such as flowers and incense. The smoke from the incense was quite thick so that I could not go near to the tomb. I just stood by and said my prayers near the tomb whose surface was full of flowers. A man was sitting by the tomb and reciting prayers.  I felt a heavy energy near the tomb which I could not explain what. After a while I left the house. The guide asked if I wanted to stay for a little while, I said no. I left the complex of the tomb of Mataram royals with a mixed feeling as I just paid a visit to the founder of  Mataram Sultanate, a powerful kingdom in Java. We went to gate and left. The guide then closed and locked the gate again. 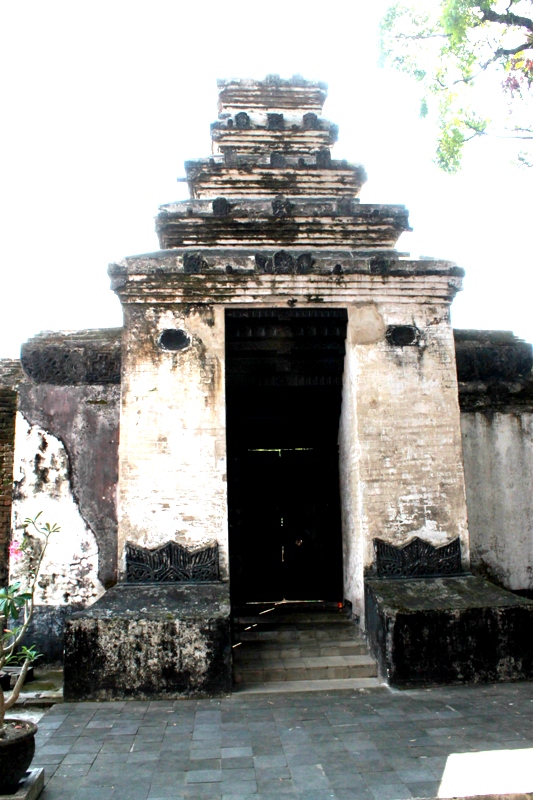 The gate to the complex of Royal tombs of Mataram is restricted and is opened on certain days for visitors.

Requirement to visit the tomb of Mataram royals in Kotagede

No photography allowed inside the tomb complex.

Tip for the guide inside the tomb complex.

The required dress for women to visit the complex of the tomb.

Next to the tomb complex is an open bath complex which is called sendang selirang. It is said that the bath complex was made by Ki Ageng Pemanahan and Panembahan Senopati. The water came up when Panembahan Senopati wanted to wash himself before praying in the mosque. At the time, the water was very limited. Senopati who was believed to have a divine energy stepped  his foot on the ground for three times, then a water spring came up which is now becoming sendang selirang.

The bath was divided for men and women. The people still use the water for washing and bathing. 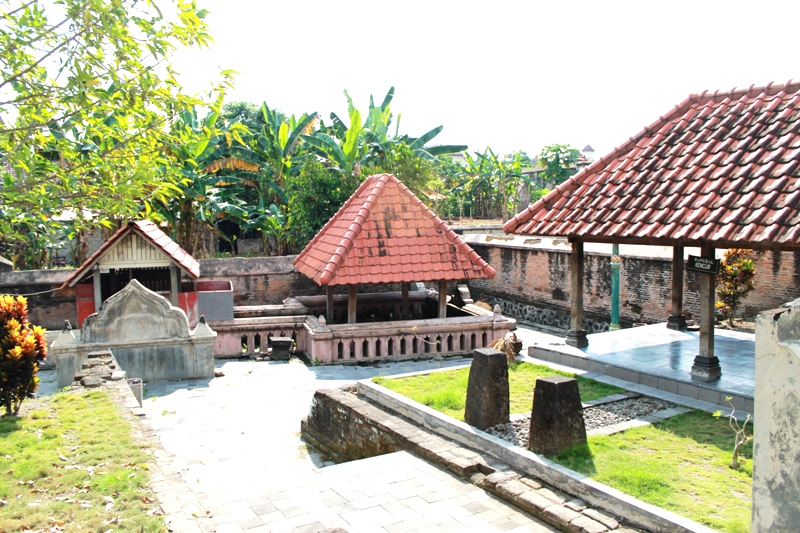 It is a ceremony that is held once a year on April by the community of Jagalan village near Ndongdongan area, where the community clean  the cemented tub. The ceremony is started with cultural procession which is called Kirab Ambengan Ageng. The procession involves the representative from Kasunanan Solo and Kasultanan Ngayogyakarta (Sultanate Jogjakarta). This symbolizes that Kotagede is the origin of Kasunanan Solo and Kasultanan Ngayogyakarta.

The Square is no longer there as the area is now occupied  with the housings of the villagers.

The current Pasar Legi was originally the market of Kotagede. The peak of the market is on Legi, a day in Javanese calendar that is based on a five-day cycle. It opens every day. In the afternoon, outside Pasar Legi, people can find many street vendors selling traditional snacks, food and dishes. The origin of Kotagede was started with the market which is now popularly known as Pasar Legi Kotagede.

Like any markets in the city of Java, the vendors are mainly women. You will be surprised to see some seniors still engage in the business as vendor. If you come on the market day, you can find many authentic traditional snacks in the market

Vendors of traditional snack and dishes can be found in Pasar Legi in the afternoon.

As soon as you come to the Kotagede district,  you can see the sign of silver handicraft all over. Making silver handicraft has been in the blood of Kotagede residents. It’s become a family business as well as home industry. Most houses open small shops for silver crafts. The history of silver handicraft of Kotagede dates back when Panembahan Senopati commanded his aides who were in charge of crafts to make jewelry from gold and silver. After the Dutch colony came to Jogjakarta, the Dutch merchants started to buy the silverware from Kotagede and the silver products from Kotagede entered market in the Netherlands. Until today, Kotagede has become one of the centers of silver home industries in Indonesia.

Kotagede is the center of silver craft industry.

Big shop has gallery as well as workshop where visitors can see how the workers make silver handicrafts. 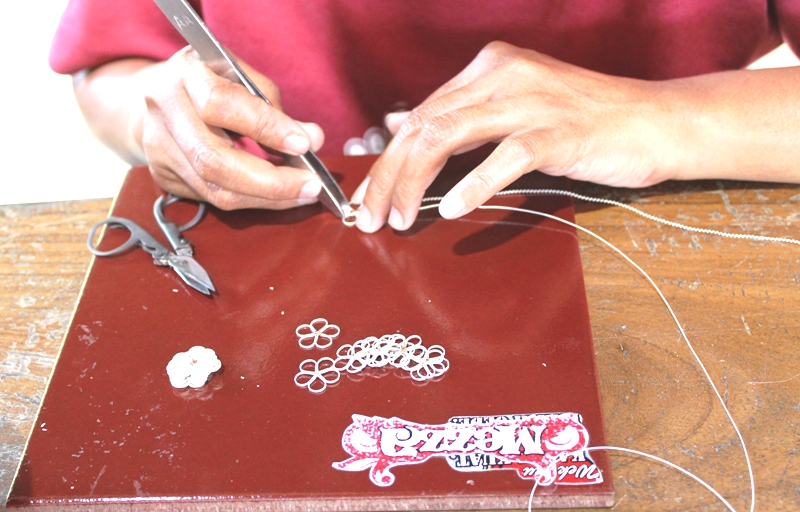 Handicraft made of silver

The alleys in the villages in Kotagede are distinct. These alleys have canal system on both sides for the raining waters. The alleys are connecting ways for the houses in the village so the whole neighborhoods  looklike  interconnected in a bloc system.  The alleys were built by the command of Sultan of Surakarta, Sunan Paku Buwono X. In the villages you can see many Javanese traditional architecture which still follow the Javanese philosophy where the houses face to the south. The entire neighborhoods also look clean. The alleys in the villages in Kotagede.

Kotagede is also the best place to see original rumah joglo (traditional Javanese house) in site. Some rumah joglo were destroyed during the earthquake in 2006. The houses were renovated, one of the joglo houses that is opened for public to see is Omah UGM. 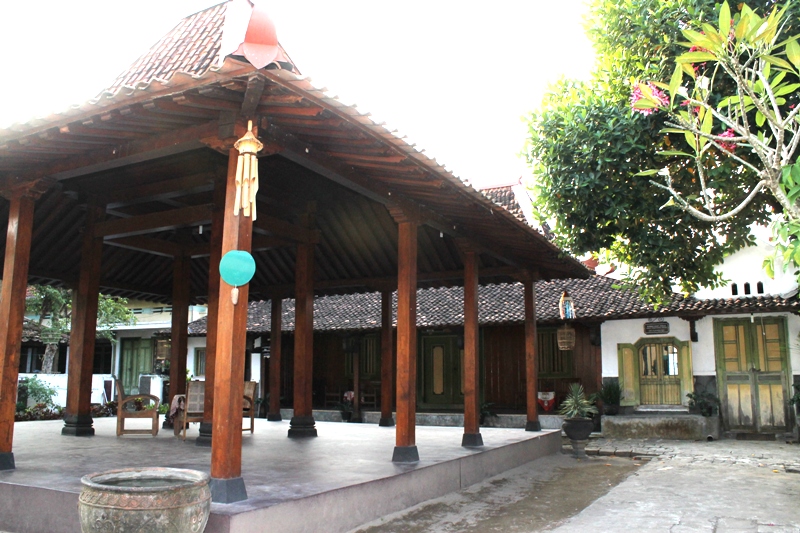 How to get to Kotagede

You can reach Kotagede from Jogjakarta city by public transportation, here are some options: From the bus stop at Kotagede, take becak  to the Mosque area.  If you love to walk, you can walk along Jalan Mondorokan to the east until the Market. Along Jalan Mondorokan, there are many small shops of silver wares. From the market, take Jalan Masjid Besar and walk to the south until you find the complex of the royal tomb sign.