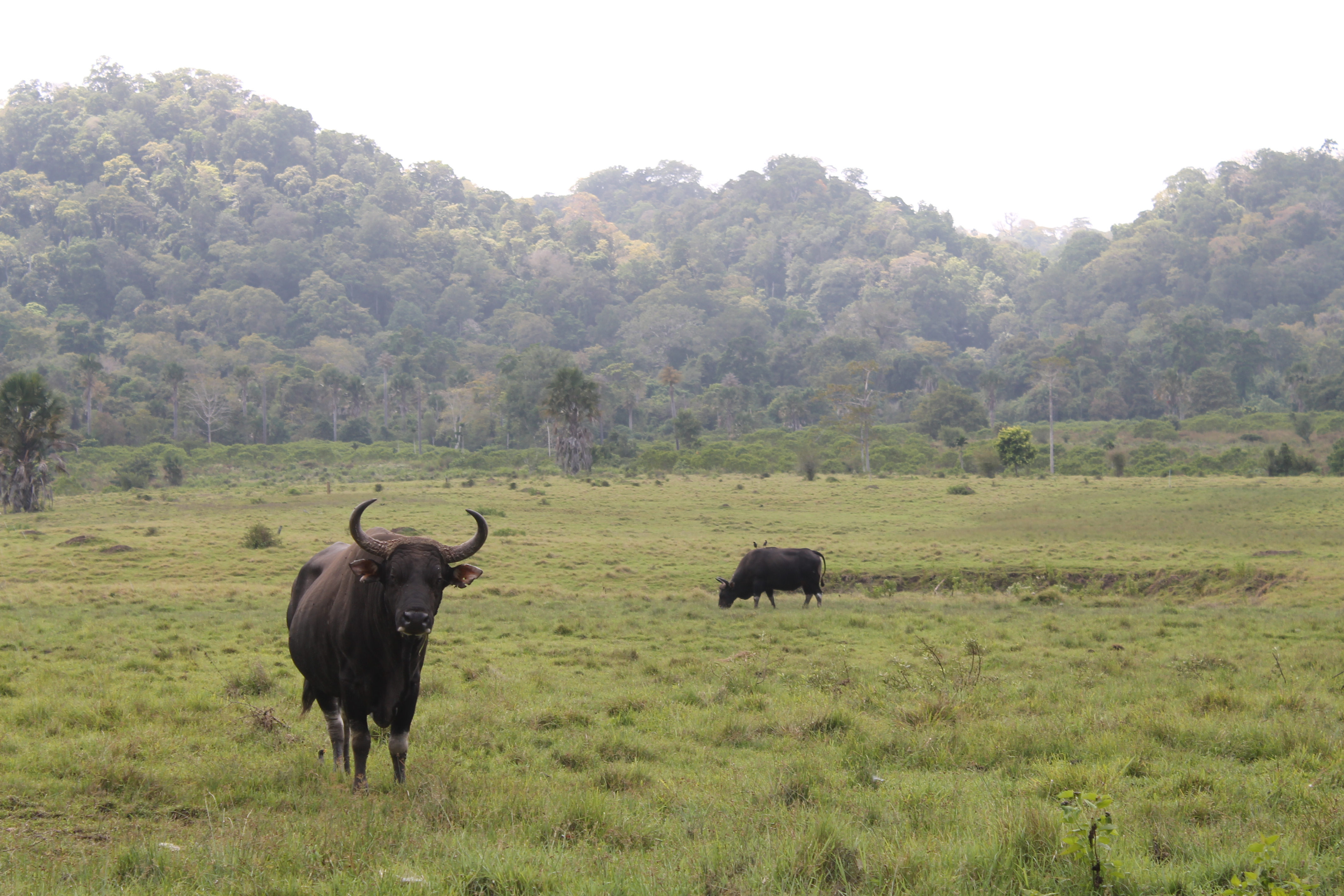 The day was still young when we left Muncar, the biggest fishing harbour in Java. Our next destination is Alas Purwo National Park. The national park is located in Blambangan Peninsula in the south east of tip of Java Island. From Muncar it takes about one and half hour drive or more.
On the way to the National Park, my guide Aekanu Haryono asked us to have a breakfast in Desa Kedungsari. There are some villages/dusun in the buffer zone. “This is the last warung/food kiosk before we reach Alas Purwo,” Aekanu told me as we were getting off the car. “Inside the National Park we cannot find a place to eat,” he added. 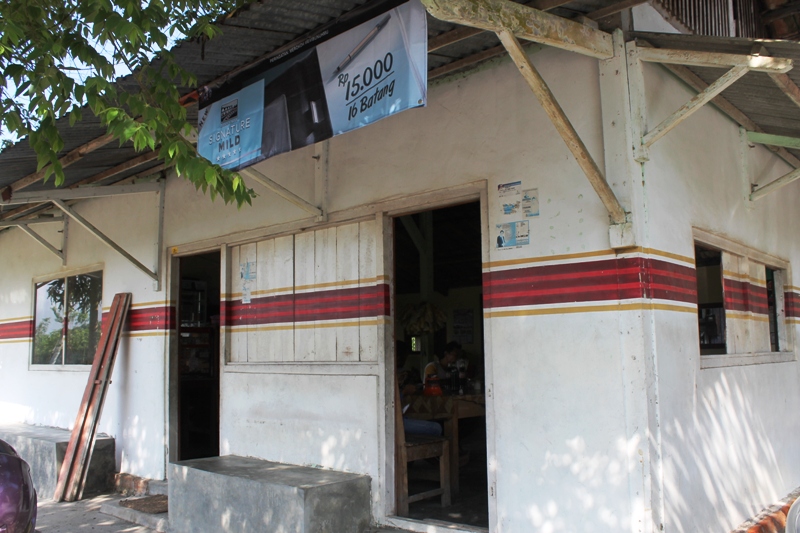 The warung/food kiosk looks decent and clean. According to Aekanu, the warung is run by the second generation of the owner now. Few years ago the warung was an old temporary house, now it’s permanent. There are some tables and benches inside the house with cemented floor.
The food is in the glass box. They just all came from the kitchen and looked very delicious. People already queued to buy the food.
The food is mouthwatering. “Be careful, the chilli sauce is very hot,” Aekanu said. I must say the food is very delicious and the chili sauce.

The warung offers fresh food from the kitchen,

The food is mouthwatering. “Be careful, the chilli sauce is very hot,” Aekanu said. I must say the food is very delicious and the chili sauce is extremely hot! After having a full breakfast, we continued our trip to Alas Purwo National Park.
The road to Alas Purwo National was in a bad shape. On the dry season it’s dusty as the wind blows. There are some hamlets/dusun on the way. In those dusun live people from different faiths. There are dusun with Hindu, Bhuddist and Muslim communities. We saw some villagers riding motor bikes with the firewood on the back.
As we were riding on the stoned road. The speed definitely became slows as the wheels stumbled on the stones. Inside the car, we were shaken.
Despite being shaken in most of the way, I enjoyed the view of rows of tall straight teak trees on the right hand. The twigs with the falling leaves look amazing under the blue sky. Under the teak trees is the carpet of corn stalks. 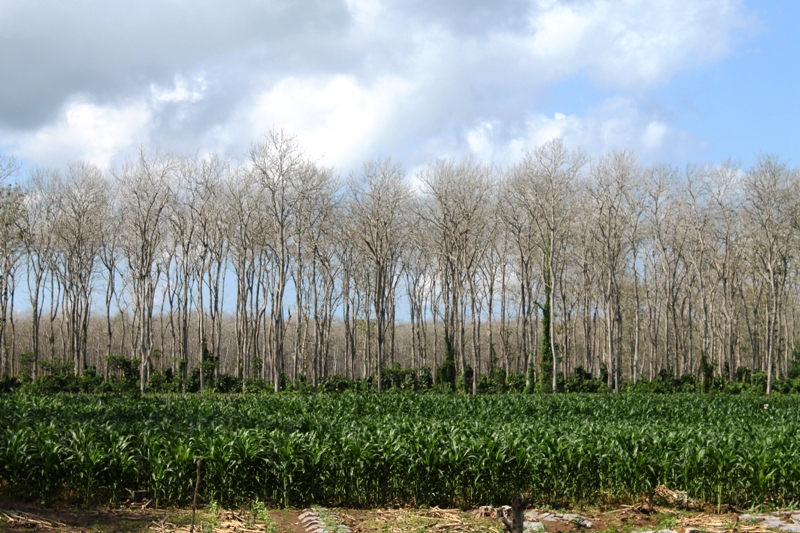 After about 45 minutes we saw the gate entrance of Rowo Bendo of Alas Purwo National Park. The tall trees start to hide the sun rays from our sights. Aekanu took care of the permit to enter the Park. I could hear the songs of insects and birds in the air and I felt the air is more humid.
Alas Purwo from its name means the first or oldest forest in Java. For people of Banyuwangi, Alas Purwo is a sacred site. They believe it is a place where the genies stay. According to the legend, it was a safe haven for the Hindu people of Majapahit Kingdom when Islam was introduced in Java in the 14th century. 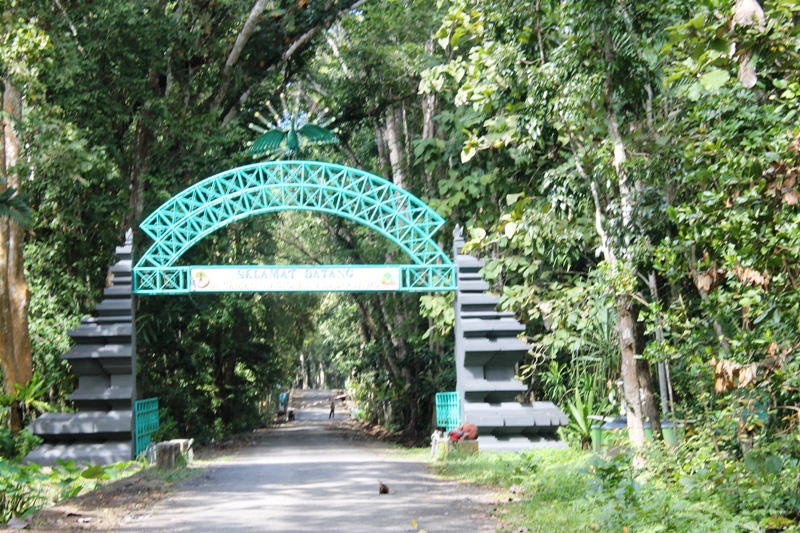 In an area of 434 kilometer square, Alas Purwo National Park has low land monsoon forest ecosystem. It has diverse ecosystems like bamboo forest, coastal forest, mangrove, natural forest, and savanna.
Then, we drove to Sadengan savannah. We passed a Kawitan site with Hindu Temple Pura Giri Selaka nearby. Kawitan site is believed to be from the time of Majapahit Kingdom. 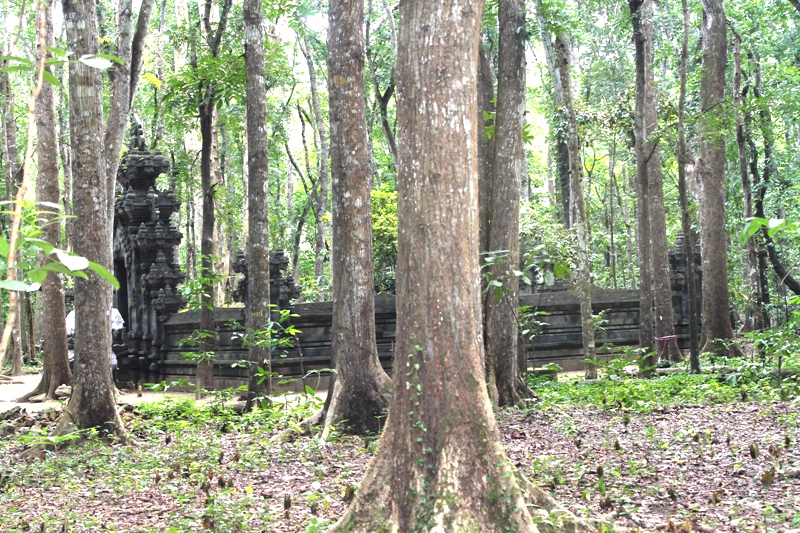 SADENGAN
About two kilometers from entrance gate is Sadengan Savanna. The savanna stretches in 84 hectare land. There is a small house for the rangers, a tower of sightseeing and some benches. The visitors can have a look the wild bulls, deer, peacocks roam. I enjoyed the sight of the wild animals from the tower. I could not believe that the bull is only 5 meter in front of me. It is best to visit Sadengan savannah before 10 in the morning after 10 the weather is getting hot.

In Sadengan savanna the bulls, deer and peacock freely roam

After staying for about one hour, we went to Pancur Beach. Pancur Beach is the last stop for the surfers who are going to Plengkung Beach of G Land.  It is the popular beach for surfers. Pancur Beach has white sands with very strong as it is on the south beach of Java.
How to get there
The best way is by renting the car. It takes 2,5-hour ride from Banyuwangi to Alas Purwo National Park. The entrance ticket is Rp 5,000 for Indonesian tourists and Rp 150,000 for international tourists. The entrance ticket for the car is Rp 10,000 and for the motor cycle is Rp 5,000.