Before the name of Moyo Island of West Nusatenggara Province, Indonesia, didn’t mean anything for those who liked to rest and recuperate. It came up to the paparazzi and press after Princess of Wales spent some weeks in the high-end luxury resort in the island in 1993. Princess of Wales was looking for a site where no paparazzi could bug her and it did work well. The public didn’t know about her holiday escape nor its location. The Princess could spend her holiday without any single publication. “The resort management told us about the plan one month in advance,” said Syafruddin, who had worked in the resort for 20 years. “We could not tell our family either, it was like a secret operation,” added the Moyo Island native. Only after The Princess left the island then the press knew about her holiday.

The secluded beach of Moyo Island from a distance.

Moyo Island is one of the three islands situated on Saleh Bay. It is in the north of Sumbawa Island of West Nusa Tenggara province, Indonesia. It is under the administration of Sumbawa Besar Regency. In 1985, Ministry of Forestry of Indonesia declared that the 349-kilometer square island as a conservation area. Around 22.250 ha area of the island is for the hunting ground and 6000 ha area is for marine park tourism. The climate in the entire island is tropical with extensive savanna landscape. The nature is rich with flora and fauna. In the savanna forest animals like deer, monkeys, wild buffalo, wild boars freely range. This is besides the 86 species of birds, varieties of snakes, bats and lizards. About 70 percent of the island is a protected area. 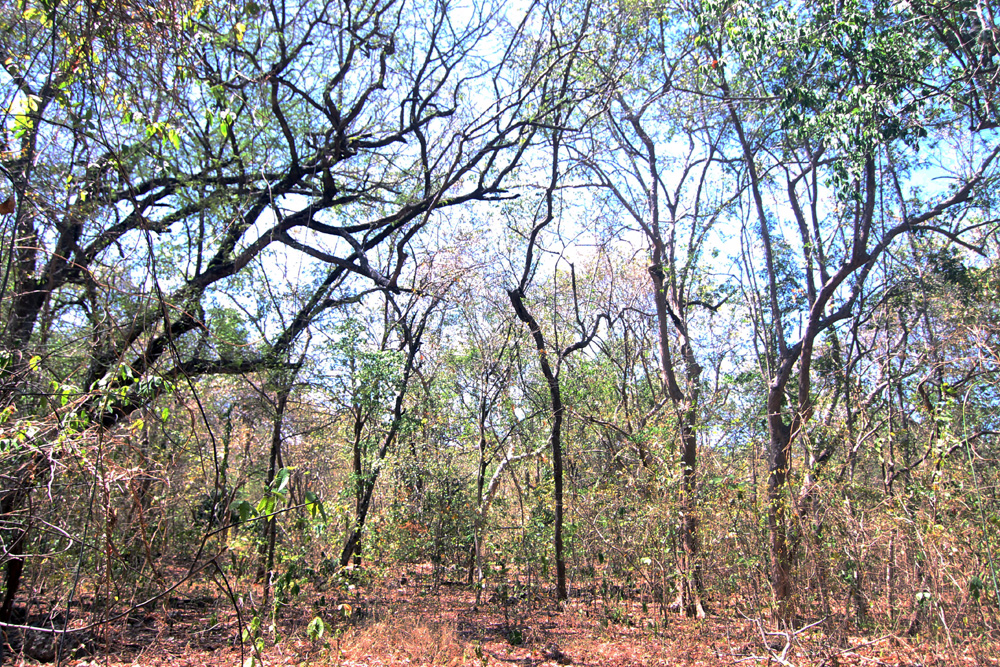 The savanna forest in Moyo Island

Anyone that googles Moyo Island in the internet will find the name of an upscale, luxury resort. The luxury resort in the north east part of Moyo Island is on a secluded beach spot. The resort is a perfectly famous hiding place for world celebrities who want to stay away from public. Mick Jagger and Maria Sharapova are among the celebrities who chose the island for their holiday retreat. As a result, Moyo Island has an image of an expensive, exclusive and luxury destination. 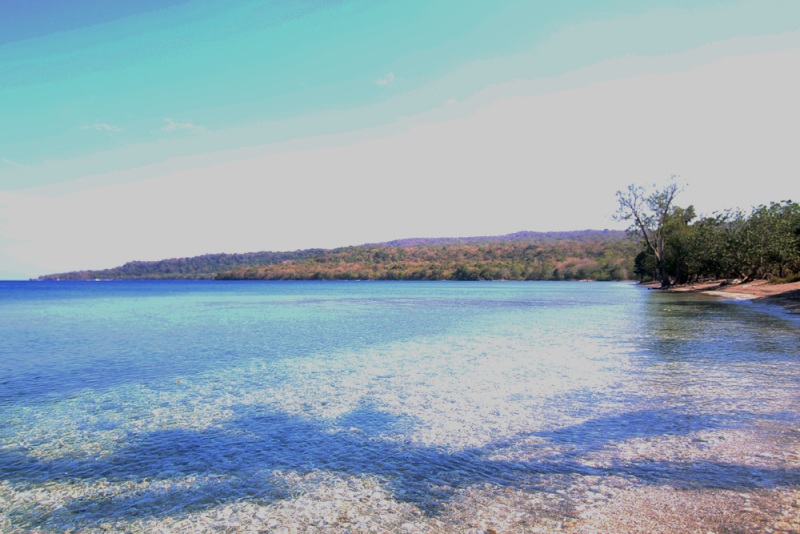 The pristine in the northeast of Moyo Island

But, if you head to the west of the island, you will find a place that is totally different from the resort area. You will find a small village or kampong called Labuanaji. In Moyo island there are four villages, and the biggest one is Labuanaji. Labuanbaji acts like the center for the island. There is a small jetty for the ferry or boats to dock. The ferry transports the villagers back and forth to Sumbawa island. And the boats and cruises bring tourists who want to see the island.

Labuanaji, the biggest village/kampong in the west of Moyo Island

The number of the entire population of the villages is about 1,800. They are from Bima and Sumbawa ethnics of West Nusatenggara. There are also people from Bajo in South Sulawesi live in the island. The people live close to each other in individual stilted traditional houses. Although you can find some houses made of concretes.

It is hard to find when the island was first inhabited. The island was first settled by people of Bima. “Moyo was nothing in the beginning,” said Pak Sukur, who first moved to the island in Labuanaji village in 2003. “There was no electricity, no road, no regular sea transportation. There were only some of families,” he said while remembering how hard the life was at the time. 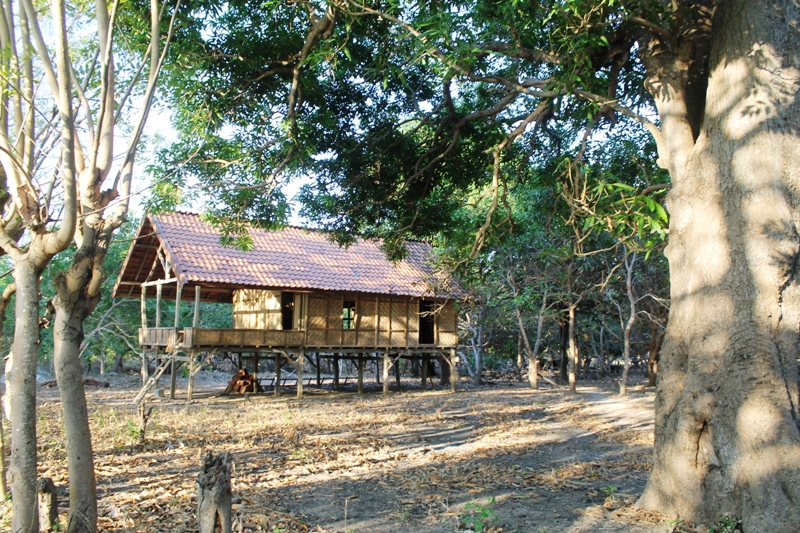 The villagers in Moyo Island used to live in stilted house

The years have passed but the life in Labuanaji seemed not to move much. The number of people who live in the island is definitely more now. The people work as farmers and fishermen. There is one school in Labuanaji. For higher education like pursuing the 10th class, the pupils need to go to Sumbawa Island. The young people work either in the boat/ferry, or they help their parents in the field. Those who can afford to buy motorcycle will work as motorcycle taxi drivers. The demand for motorcycle taxi is high when a cruise docks or a boat brings tourists from Sumbawa. It is a busy time for the young people of Moyo Island to take the tourists to see the island with their motorcycles.

The economic life in the island is limited. It has no open market where they do the selling and buying. All commodities are imported from Sumbawa Island including the vegetables and fruits. As a result, some people open small kiosks to accommodate the lack of the market in the island. 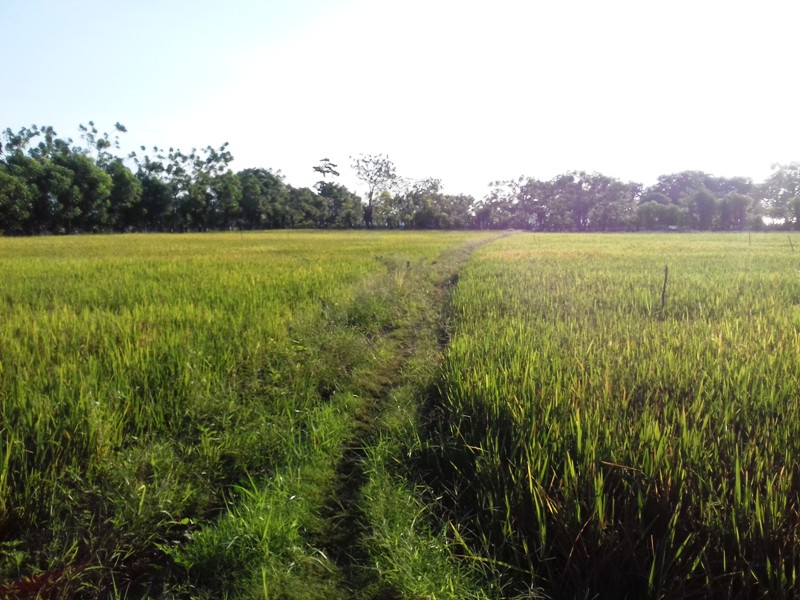 The rice paddyfield in Brangrae village of Moyo Island

The food commodities  that grow in the island are not enough for the market in the island. The type of the soil in Labuanaji prevents   plants like cassava or banana to grow. In the neighboring village like Brangrae the soil is more fertile. There the people grow paddy, cassava and bananas.

In short, the villagers depend on the supply from Sumbawa for their daily needs. This can be an issue when the weather is bad or the sea waves are stormy. “We had experience where we didn’t sail for one week because of the bad weather, and our stock was gone” said Pak Sukur.

The transportation in the island is only available by motorcycle, boat or on foot. The road in the island is cobble stoned road, with some segments are cemented. The rest of the road is earthed road that makes it slippery during the rain season. The road to Matajitu Waterfall is not bad in the first segment, but in the later segment you can forget about it.

Despite the lack of infrastructure, Moyo Island offers the off beaten track experience for the adventure seekers. The entire island has different landscape, one part is rocky rugged, the other part is fertile and flat.

Those who like savanna Moyo Island is for you . Trekking in the savanna forest offers a breathtaking view of vegetation while hearing the songs of the birds and insects. When you are lucky you may be able to come across monkey or wild boar on your way.

If you like marine, Moyo Island is also what you look for. Ask the locals for the best spot for snorkeling and diving. The closest spot from Labuanaji for snorkeling is Takat Sigele. It is a raising sand in the middle of the sea, which is only 20-minute by sampan (a tiny motor boat). There are other snorkeling spots on the island that you can also explore (see All about Moyo Island). 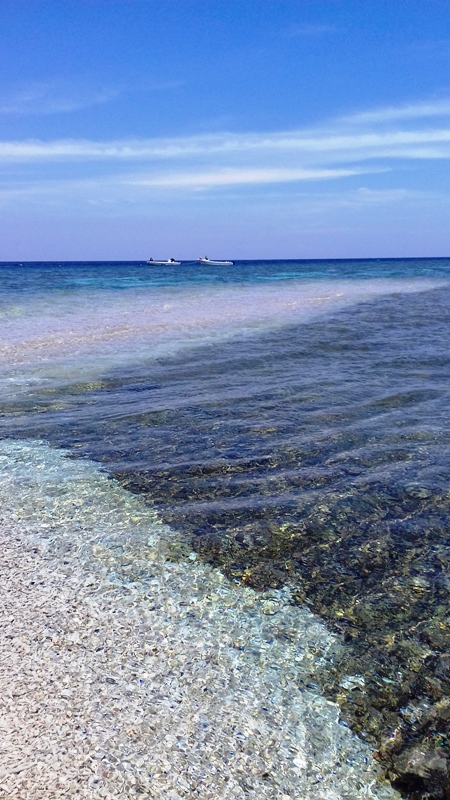 Takat Sigele, a raising sandy island, a paradise for snorkeling off Moyo Island

Moyo Island has seven waterfalls. Two of them are famous among the tourists: Matajitu Waterfall, where Princess Diana took bath, and Diwu Mbai. Those are accessible by motorcycle and on foot if you like trekking.

The lack of the electricity in the island is a blessing in disguise. It means the island doesn’t have industry that pollutes the waters and air. It is easy to find pristine beach by Labuanaji, but do not expect to get nice corals when you plung on it. In the waters of Labuanaji, the corals are all broken because of the use of fish bombing several years ago. But, in any point on Labuanaji Beach, you will get awesome view of sunset in the dusk.

Moyo Island is the place for those who are seeking nature and a down-to-earth village life. It is not for those who seek an island life with clubbing and touristic things. In Moyo Island you just stay and enjoy the sleepy life of a village.