In the morning I was woken up by the sounds from the living room. I looked at the clock  on the wall, it was 7.30. I slept soundly in Mitra’s room. She was kind enough to let me stay there.

Everyone had gotten up already. The family  greeted me as I stepped out the room. Maryam’s mother was busy in the kitchen preparing for breakfast. Maryam said that we could leave at around 9 am after breakfast. I agreed with her and I was looking forward to seeing Shiraz again.

Maryam’s mother, again, served a big delicious meal: bread, salad, sweets, and cookies. It was even bigger than the breakfast at the hotel that I had stayed at. I thanked Maryam’s mother for serving a very good breakfast. As always she just gave a nice smile in return. 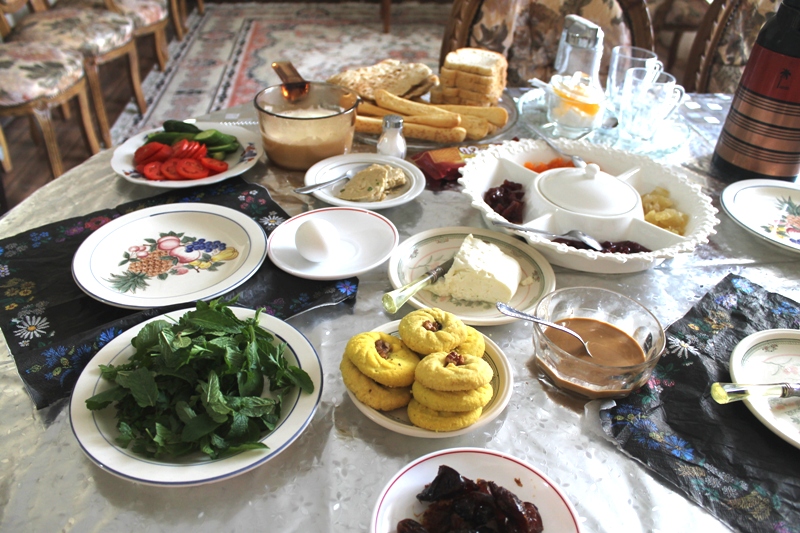 We were ready to go and Maryam confirmed with me  the places we would like to visit. I told her that she knew the city better than I did,  so I let her arrange which place to be seen first. We rode in her car and our first destination was Vakil bathhouse.

Shiraz was one of the ancient cities that has still been inhabited until  now.  The capital of Pars Province is now the fifth populated city in Iran  with around 1.9 million population. It is situated in the southwest of modern Iran.

When Karim Khan Zand ruled Persia, he had the title Vakil ar Roaya (the representative of the people) instead of Shah or king.  He ordered the construction of the facilities in Shiraz.  During his time,  gardens, bath houses (hammam), caravanserai, bazaar, and mosques were constructed. The most extravagant construction was the Karim Khan Citadel.  The Citadel was situated in a big complex of bath house, bazaar and mosque. The whole complex has been called Zandiyeh from the name Zand.

It was not easy to find a parking slot in the parking area. It looked like many people visited the Vakil complex on the cloudless morning.  We stepped to Vakil bathhouse. From outside, the door to the bath house was small and I didn’t expect to find a spacious, large room inside.

The Vakil hamam or  bath house  was  built in the 18th century. The bath house was no longer used. It has been now turned into a museum where visitors could get a glimpse of how the bath house looked like in the past.

The first room had an octagonal form with a central dome having ventilation for the skylights.  The dome rested on eight monolithic stoned columns. The columns form vestibules that are plastered with paintings, some of them faded. In the middle of the room was an octagonal pool to adjust the temperature inside the room.

On the day, there were many visitors ranging from the local tourists to school children. They crowded the first room observing the wax statues of people. The  wax statues depicted how the bath house functioned in the past. The statues pictured the people  that visited the hammam. In its golden time, the bath house catered people from all walks of life. The customers ranged from peasants to clergy. For the king there was a special room. In the first room the customers waited for their turn. And while waiting they could socialize with each other. In modern times, this room probably was a lounge. 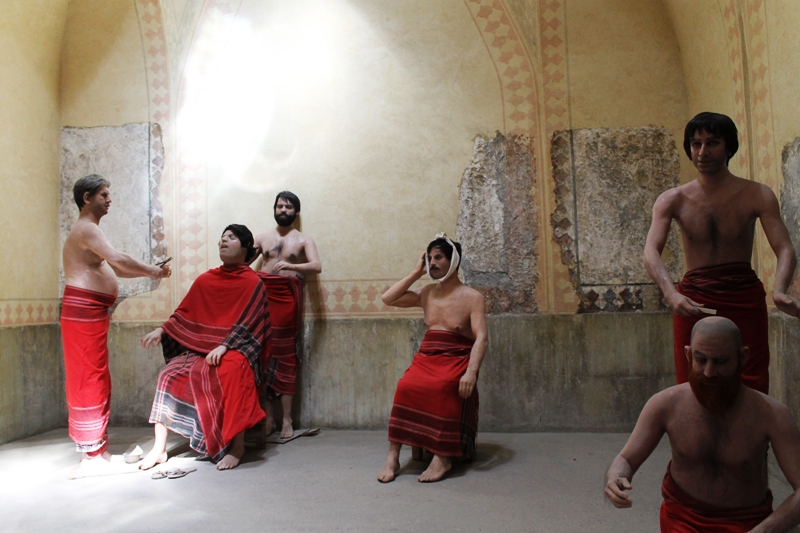 The second room  in the hammam was a treatment room.  It has four monolithic stoned columns. Vakil hammam was the second hammam I saw in Iran, the first one I saw was in Kerman. There were no wax statues in the  Kerman bath house  so I could not imagine the treatment there in the past.  In Vakil hammam, all kinds of treatment were offered as displayed by the wax statues. The service included from shaving, hair cutting, to massage. Not only that, the hammam was also used to hold a traditional ceremony.  It is interesting to know how hammam functioned as a place for social interaction in the past.

After visiting the hammam we moved to Vakil Mosque. The Vakil Mosque was constructed between 1751-1773. The complex of the mosque is so large, it covers an area of 11,000 square meters. The inner courtyard has two yvans that are decorated with pretty floral tiles with dominant pink rose colors. The floral tiles showed that roses were the flowers of the city.  The floral tiles are in addition to the calligraphy that also decorates the yvans. In the middle of the court there was a small pool.

The prayer hall is supported by 48 monolithic spiral columns. The vestibules are enriched with geometric calligraphy of the Qajar Dynasty.  Although the Vakil Mosque was constructed during the Zand Dynasty, the following Qajar Dynasty restored it. 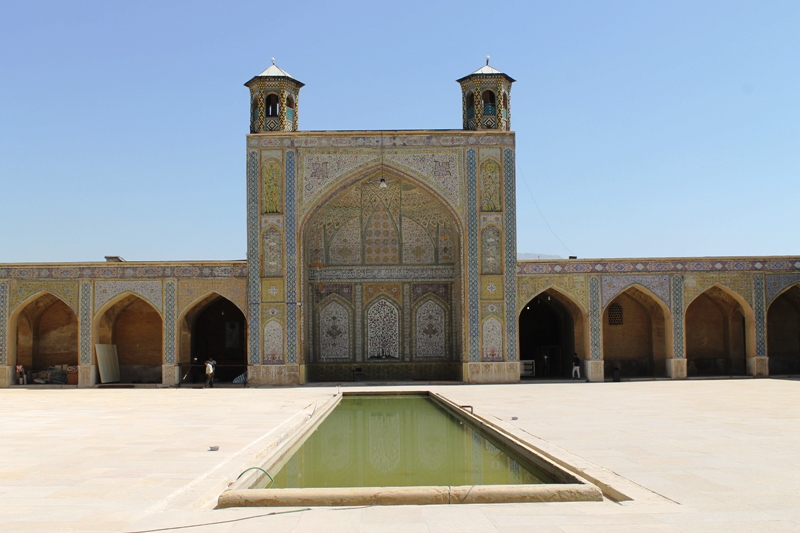 As we visited the mosque, many parts of it were being renovated. Nevertheless,  I could still enjoy one of the heritage sites of the Zand Dynasty in Shiraz.

Located in the same complex is the famous Vakil Bazaar. I went to Vakil Bazaar in my previous visit,  but I didn’t want to miss it while I was in the complex. As always, there were a lot of attractive handicrafts offered in the bazaar. Many of them caught my eyes like the enamels, the textiles  and other knicks- knacks. However, as I still needed to travel to other cities, I didn’t want to bring many things. Strolling and window shopping in the covered bazaar was really enjoyable.  “Iji, we need to move on,” said Maryam looking at her wristwatch. She was right there are other places we liked to see. 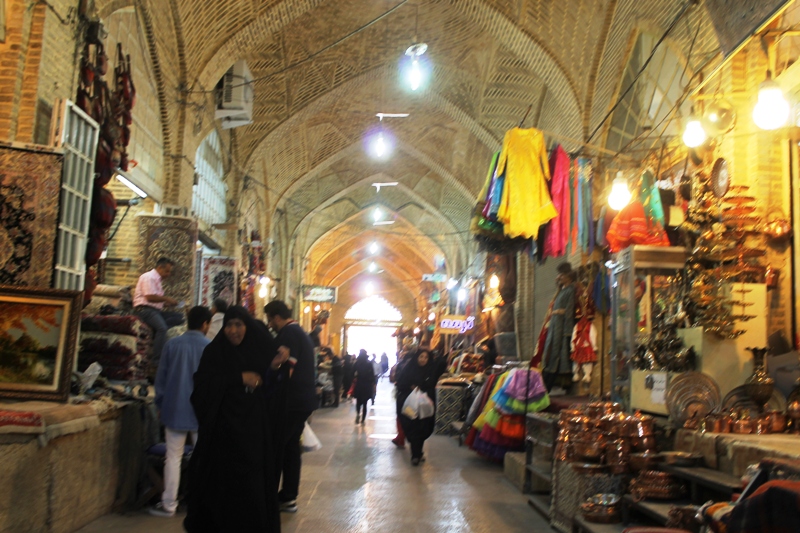 Our next destination was the famous mosque Nasir Al Mulk Mosque.  Among the foreign tourists the mosque has been nicknamed Pink Mosque because of its dominant pink color. And it is the mosque in Iran  that has been portrayed the most in many social media  accounts. 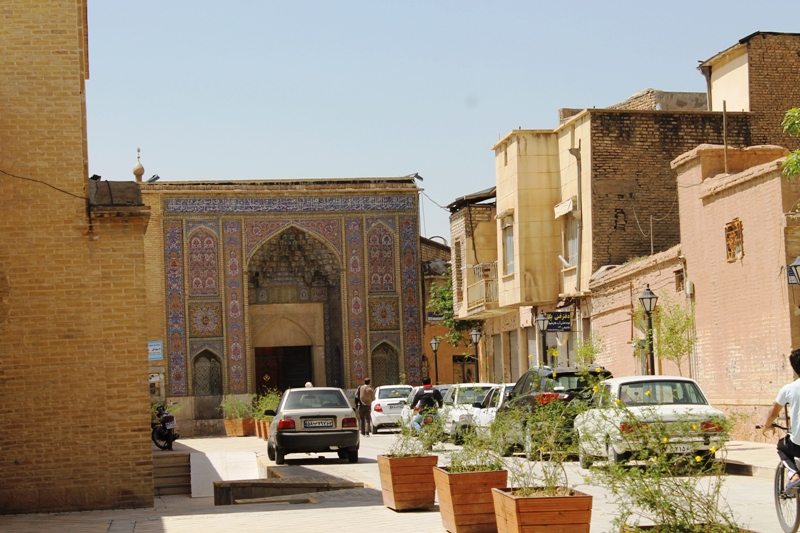 From outside, the gate looked like any other gate of  the mosque, only pink was the dominant color. Different from the Vakil mosque that was commissioned by the king.  The Al Mulk mosque was constructed by Hassan Ali Nasir Al Mulk,  a wealthy person from a noble family of Shiraz.  It was built  from 1876 to 1888. One of the three architects that designed the mosque, Hassan Memar, also designed Eram Garden in Shiraz. 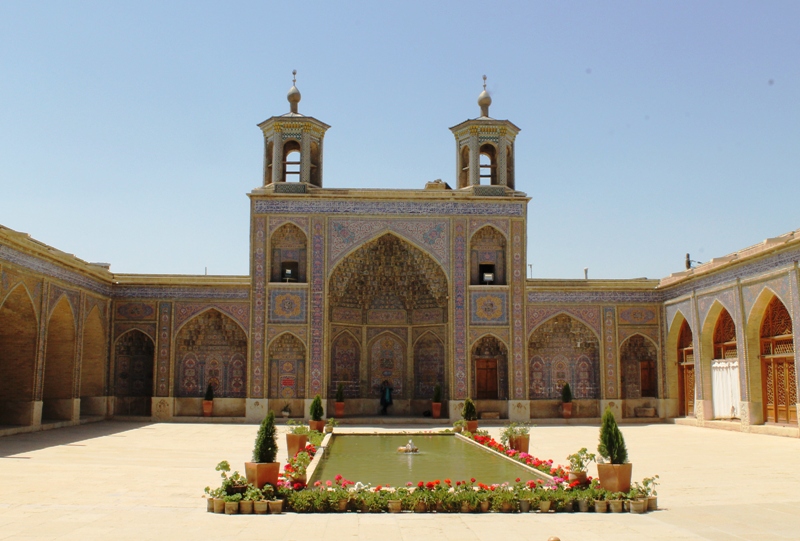 Al Mulk mosque covers an area of  2730 square meters. Its courtyard has two yvan with stuccos decorated with very lovely floral tiles depicting roses and iris. The tiles have seven colors. They are so pretty  that they could soothe  the eyes. I stayed quite a while in the yvan  as I just wanted to imbibe its charms.  It felt as if I was surrounded by roses.  In the middle of the court there was a rectangular pool that made the court just more perfect.  We spent some time in the yvan and took some photographs, then we stepped into the  celebrated prayer hall. 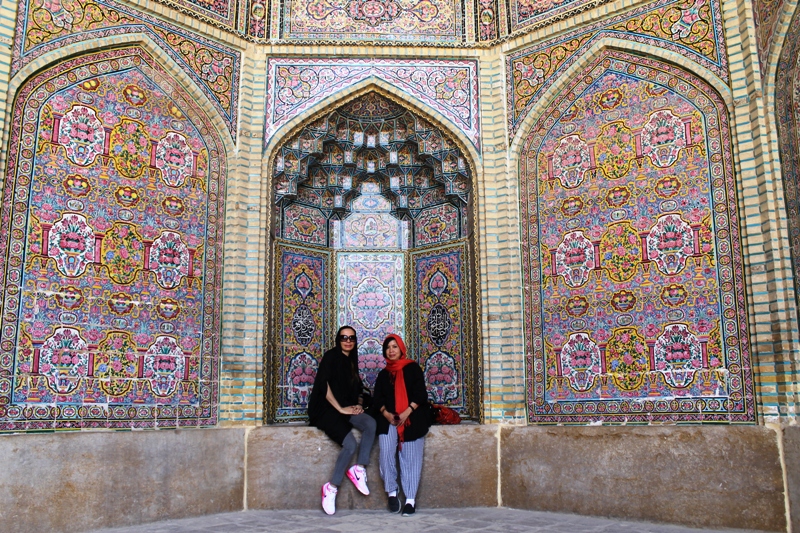 In all of my visits to the mosque in Iran, only in the Pink Mosque I observed where people visited the mosque likely not to pray but to take photos.  Well, myself included. Although it was not crowded when we visited it, the visitors needed to take turns to get a pose by the colorful glass windows. They wanted to catch the lights that  still came through the  colorful glass window.  The lights would disappear soon by midday. 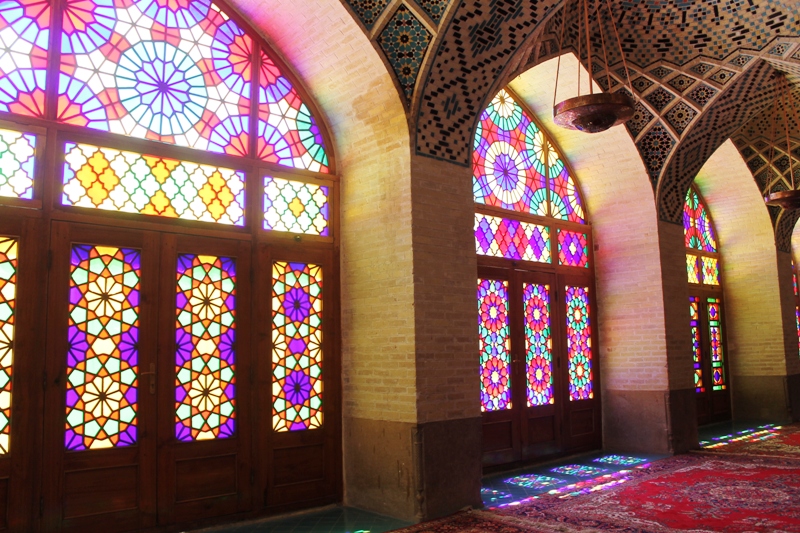 Some visitors were ready to use their sophisticated gears to take photos inside  the prayer hall using a model. I just could not imagine how it was inside the prayer hall during the recommended visiting hour. 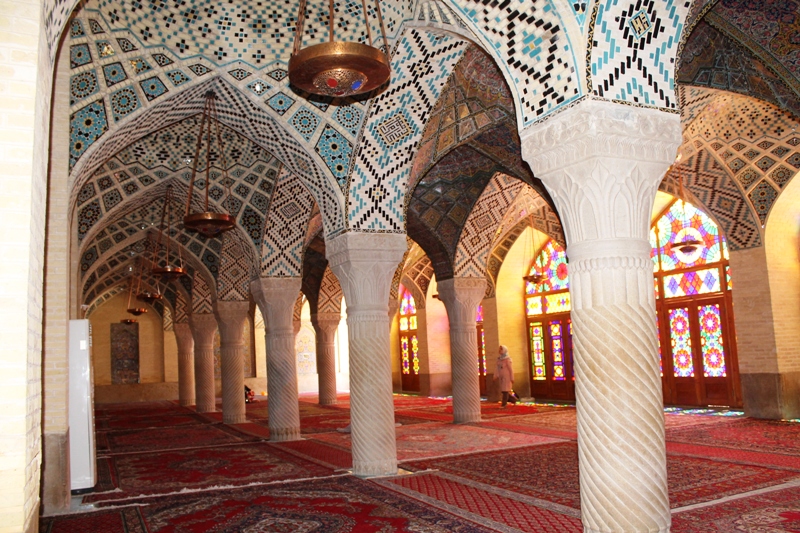 But to be honest, the hall prayer was heavenly beautiful. The precision of geometric vestibules, the spiral monolithic stoned columns, the geometric and floral plasters on the vestibules, the floral walls, and of course, the famous colorful glass windows really make Al Mulk Mosque an excellent place to pray, as a matter of fact.

Again, I spent some time inside the prayer hall to absorb the beauty surrounding me. However, I could not stay long as there were other sites we would catch to visit. 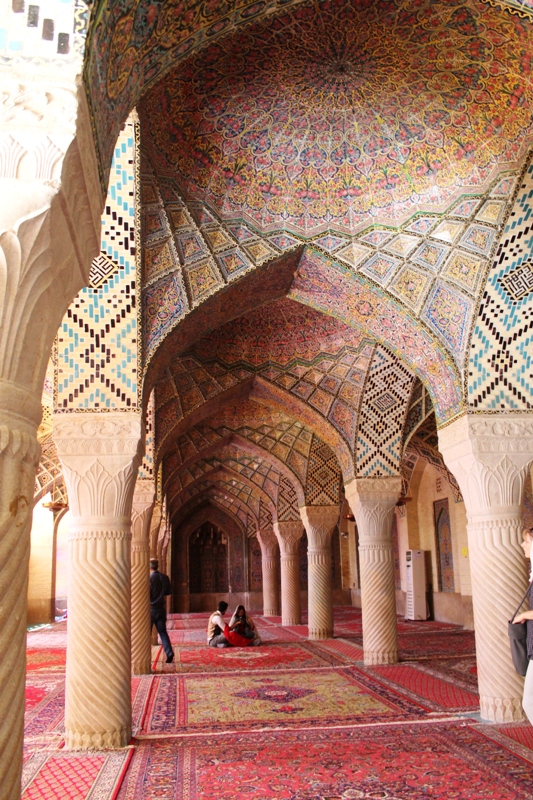