After Germany, Denmark is the second foreign country that I first visited. Although both countries are situated in the European continent, their culture is not absolutely similar. I just realized it after I was exposed to Danish things during my one-week stay in Copenhagen.

My exposure to Danish culture was surely facilitated by my friend Pernille who was also my host during my entire stay. My stay in Copenhagen was a kind of an eye opening experience to the North European or Nordic culture and system. Pernille used to work as a public relation  so she knew well how to introduce her country and culture to someone who was inexperienced to the Nordic culture  like me. The fact that she had traveled to different parts of the world including Asia helped her to host me, who had not been exposed to the Nordic culture.

Having traveled with Carsten by car from Kassel, Germany to Copenhagen, Denmark almost a whole day, I just wanted to adjust myself and on the following day I didn’t have any plans until noon. Pernille provided me one out of  her three bedrooms to stay. I was lucky I had the chance to stay in the old apartment building. How old was the apartment building?  Well, the apartment building didn’t have a lift. So when I arrived, I needed to carry the luggage up to the fifth floor, where Pernille’s apartment was located.  Except for the kitchen, the floor was made of wood so when we stepped in, it sounded.

There was no bathroom either. Instead there was a capsule for showering. It was basically not an issue. Only  the capsule shower was located in the kitchen. It  was shielded by blurred thick mica plastic.

Normally none came to the kitchen when someone was taking a shower. Coming from a different cultural background, Pernille understood that it was uncomfortable for me. She put a curtain in the kitchen door, so other people would not see my silhouette when I was taking a shower.  When I talked about other people, they were people who rented the room at Pernille’s apartment like Carsten.  She also explained to Carsten about the curtain  on the door. He probably thought it was komisch, but he understood about it. When I was there, there was only Carsten  who rented the room at Pernille’s apartment. Other than the capsule shower, the toilette was also located in a separate closet with no toilette shower.

The capsule shower in the kitchen, Copenhagen, Denmark

Pernille’s apartment was now totally different, she renovated it some years ago. She sent me a picture of it.  There was no showering capsule in the kitchen anymore. She had a dedicated bathroom. And her kitchen was also transformed into a more modern one.

Despite the difference in the house system, I liked it. Her old apartment building reminded me of the stories that I read about European apartments in the past. I would later tell how we went to the attic and roof of the apartment.

We went to Nyhavn in the afternoon. Pernille’s apartment was located in Norrebro, which is considered the central part of the city. Each part of Copenhagen was very well connected with public buses.  It  was easy to go from one part of the city to another by city bus. In that year, the public transportation in Copenhagen already used the card system, which was also new for me. Public transportation in Indonesia just introduced the card system for payment about six years ago.

Since the city transportation was very well connected, as far as I remembered, Pernille and I never took a taxi when we navigated the city.  We just needed to pay attention to the service time of the public bus. It was only one time when we came home late from a red light district area and we needed to take a taxi..

Nyhavn in the afternoon was alive. It was a waterfront part of Copenhagen that is close to the harbour. Nyhavn has been busy since the 17th century.  The famous Danish author, Hans Christian Andersen, even once lived in one of the houses in Nyhavn.

It has also been one of the popular spots in Copenhagen for tourists.  The picturesque colorful townhouses were indeed attractive. The cafes and restaurants were housed in those townhouses. They  were occupied by both tourists and the locals. The seats on the  sidewalk cafe were full of people who enjoyed sipping their coffee overlooking the canal on the bright day. But Nyhavn was not only for the haves tourists. I also saw tourists who ate their home-made sandwiches by the banks on the canal.  I felt it was a democratic place where anyone could enjoy the area. The promenade by the canal was spotless. And although located close to the harbour it was  odorless, I just referred to the typical smell in the harbours in Indonesia.

The canal was clean, I was amazed. I saw some boats and yachts were docked there.  There were actually some canal tours offered to the tourists. As a local, Pernille knew which canal tour had a longer route. We reached the jetty and boarded on the boat. It was an open top  boat with only some tourists on the boat. The canal tour was exploring for me as I could see the city from different points of view.  The bridges that we passed over and the life by the canal.  While in Nyhavn I saw old houses, we passed the neighboring upmarket area of Copenhagen with modern, high buildings. From the canal tour, I could see Copenhagen from the old and modern sides. And  Pernille was right. The route of the boat was longer.  The time flew so fast. It was one hour already where my eyes gazed on part of the city from the boat through the canal. It was perfect. I enjoyed the canal tour a lot. Pernille was happy that I had a good time on the canal tour.

Arriving home, I helped Pernille to prepare a Danish dinner. Basically, it didn’t need a big preparation as everything was already there like the Danish bread, vegetables, fruits, butter and cheese. There were also slices of turkey. It was another culture and world.  The meal was not something I ate for dinner back home. I was just enjoying the experience. It was again another  eye opening experience to the Nordic culture.

I must admit that we didn’t rush in exploring Copenhagen. Pernille had a good understanding about it since she was a traveler herself. I could not be in a rush in a four-season country. What was the normal temperature for  the locals was  eventually cold for me. This is because I came from a country where the everyday temperature was 32 Celsius.

The statue is situated in Langelinie, part of Copenhagen that faces the sea. We went there by bus. My first experience exploring Copenhagen by public bus was it took a lot of walking. We usually got off of the bus at the closest point to our destination. From there we walked on foot to the Little Mermaid statue. But walking in Copenhagen was very nice. The streets had pedestrian lanes. And Langelinie is a waterfront city with a promenade for both pedestrians and bicyclists. The whole area was so clean.

The water was very calm and the sea breeze was refreshing. Walking side by side with Pernille, I was often left behind, since she was taller than I was.  We reached the point where the Little Mermaid statue was located. There were also some other tourists who were visiting. The  bronze statue of Little Mermaid that Danish people called  lille Havfrue was sitting on her fin on the big rock. The statue faced the quiet sea as if waiting for something. Different from my imagination, the statue was actually not big. The figure of the story that I read when I was a child was now just in front of me. 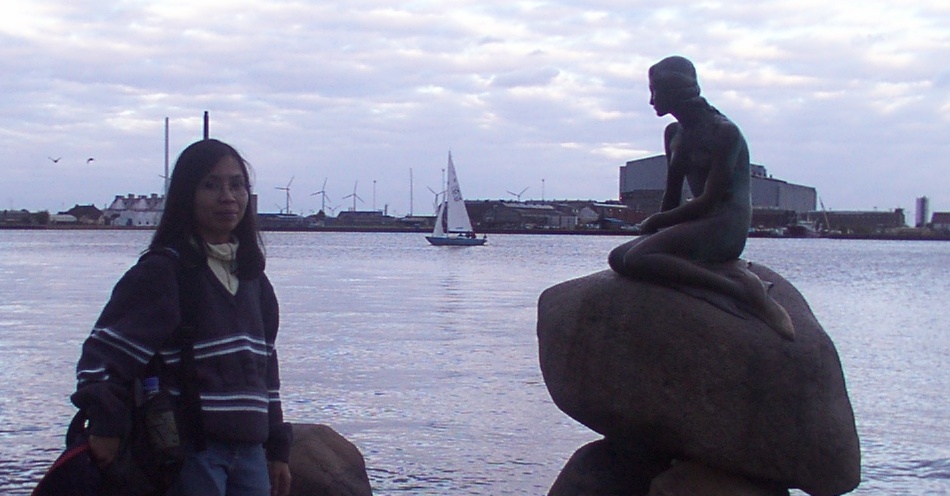