Cap Go Meh  is a Hokkien term that literally means 15 days or nights after the Chinese New Year. In China, it is a festival known as Yuan Xiao festival or Shang Yuan festival. In Hong Kong it is called Yuen Siu festival and in Viet Nam the people call it  Tết Nguyên Tiêu festival. Chinese people in Singapore, Malaysia  and Indonesia celebrate Cap Go Meh with festivity.

In Indonesia, the Chinese people had traditionally celebrated both the Chinese New Year which is popularly called Imlek and Cap Go Meh festival since the colonial time. All Chinese related celebration was discontinued in 1967 by a presidential decree when President Suharto ruled. In 2001, the decree was revoked during the governance of President Abdurrahman Wahid. In 2003 Chinese New Year was declared national day by President Megawati Sukarnoputri.

There are several versions how Cap Go Meh festival was  started.  Yuan Xiao festival dates back 2000 years ago during Han Dynasty in China where the emperor and his people adhered to Bhuddism. On the full moon of 15th night of  Chinese New Year, the monks lit the lights to honor Bhudda.  The Emperor Han Ming Di commanded his people to lit the lights in the palace and all vihara to honor Bhudda. He also asked for his people to hang the lanterns in their houses. 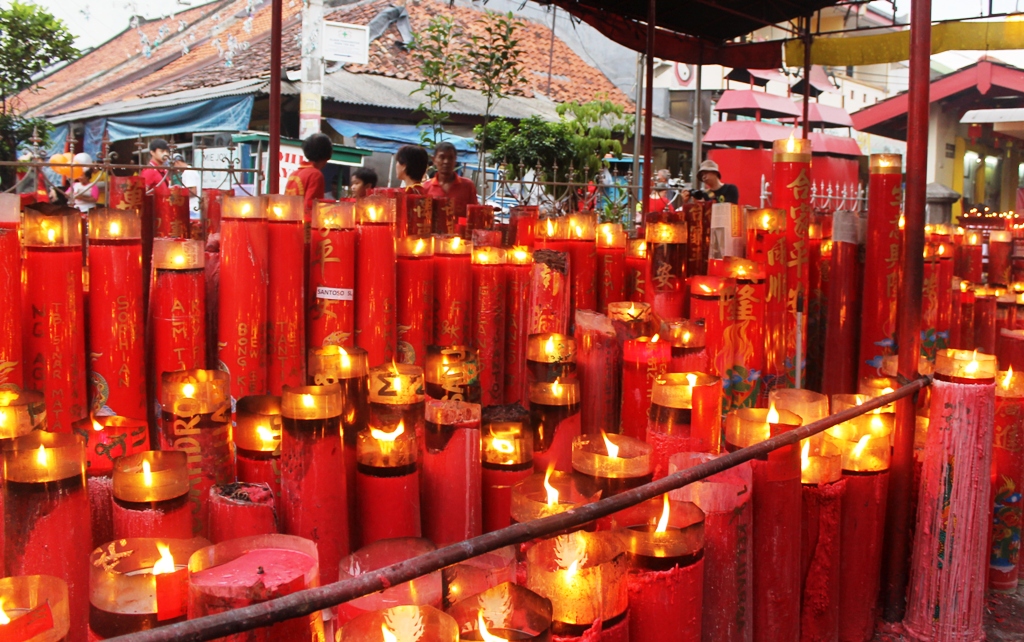 Red, lighting, flames are symbol of prosperity and happiness.

Another version says that it has been celebrated to commemorate the throne of Emperor Han Ming Di which occurred on the 15th of the first month of  Chinese New Year. Praying and worshiping in vihara are important elements for the Chinese on Cap Go Meh. Old dragon that is no longer used. It was used for dragon dance performance during Cap Go Meh.

There are a number of  places in Java Island, Indonesia where the Chinese people have lived for generations. The existence of Chinese people in Java cannot be separated from the journey of Cheng Ho (Zheng He), a Muslim admiral from China of Ming Dynasty who had sailed  to the south (Nanyang) for seven times in the 15th century. Cheng Ho sailed along with 300 fleets carrying 30,000 people on board.

Cheng Ho and his fleet visited several ports in Java. A book of history of Sunda entitled Tina Layang Parahyang (Notes from Parahyangan) revealed that the first group of people from China landed in the mouth of Cisadane River (now it is called Naga Bay) led by Tjen Tjie Lung in 1407.

Tjen Tjie Lung was believed to be  a member of Cheng Ho’s fleet. Lung was stranded with seven families and nine girls. They initially wanted to sail to Sunda Kelapa, Old Jakarta.  They asked for help from the local ruler of Parahyangan. The officers of  local rulers fell in love with the girls and married them. They were entitled with lands and had lived in the area by Cisadane River. 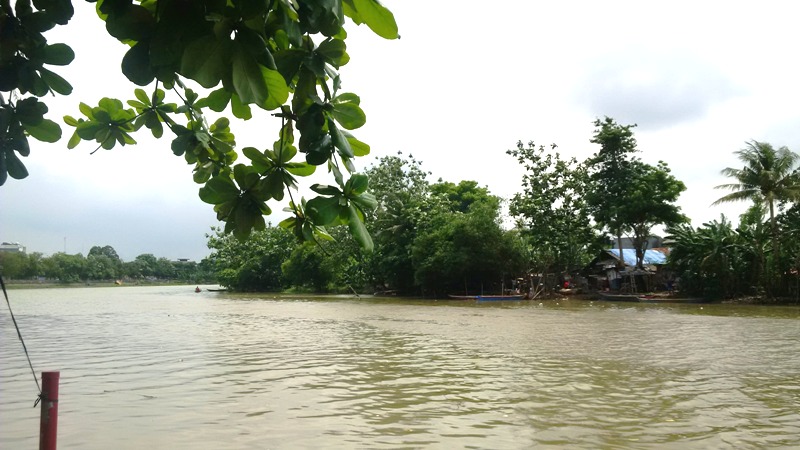 The second wave of Chinese people who come to Tangerang is believed to be in 17th century during the Qing Dynasty. They sailed from China and landed in Banten, a busy international port in the north of West Java.  They came at the period of  the Dutch fleet sailed to Indonesia.

After the agreement between the Dutch East India Company and Sultanate of Banten in 1682,  the area from Batavia (Old Jakarta) to the eastern part of Cisadane River had become under the control of Dutch East India Company. In order to defend from Banten, in 1685 the Company constructed a fort in the east of Cisadane River. The fort in local dialect is called benteng.  The company gave the property rights for the first settlers who opened the forest. It was the Chinese who had the skill in agriculture that came first. They worked on the land and planted sugar canes for European markets.

The Chinese  who could not afford to live in the fort area settled  outside the fort. This is one version why these Chinese are called Benteng Chinese although the fort is no longer there.

These Chinese people mixed with the locals through marriage and have lived in the area for generations.  In Malacca these Chinese are called Peranakan Chinese while in particular in Tangerang, they are called Benteng Chinese referring to the fort. 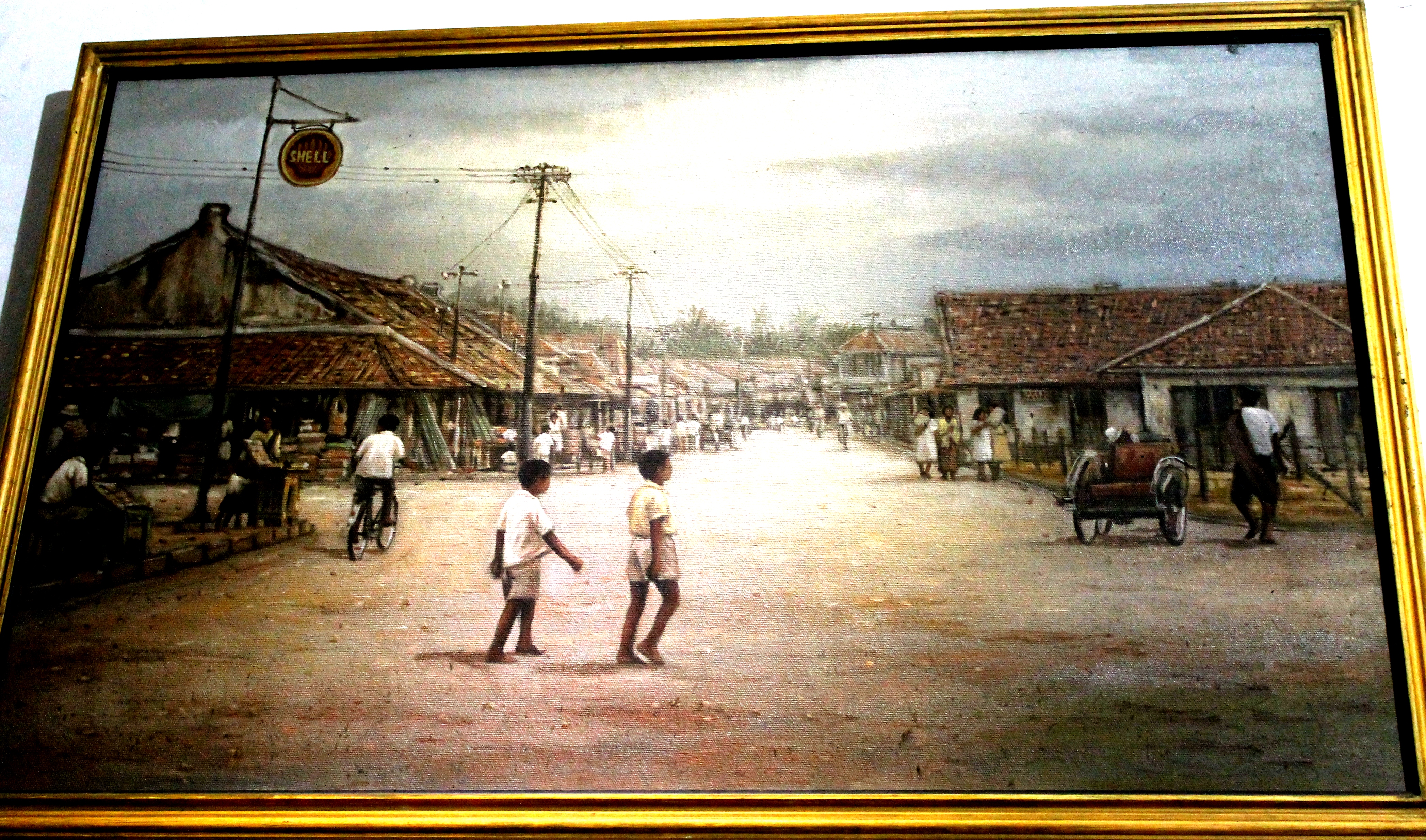 A reproduction of a painting picturing Tangerang town in the colonial time. Shell gas station was already there.

The history of Tangerang is related to  Ci Sadane River that originally flows from Mt. Pangrango.  At the time, river was the way for transportation. The merchant boats used to sail to this river. The first Chinese that stranded with their ship also moored in Ci Sadane River.

The river bank had docks like stairs for the people to transfer to the boats. There were two docks that are popularly known as Tangga Ronggeng  and Tangga Jamban. The first dock  was made for the people to pass and the cokek/ronggeng dancers from the opposite side of the river used to use the stairs in the dock so the locals called the dock  Tangga Ronggeng. Cokek orginates from cio kek which means dancing and singing, a local dance influence by Chinese culture. 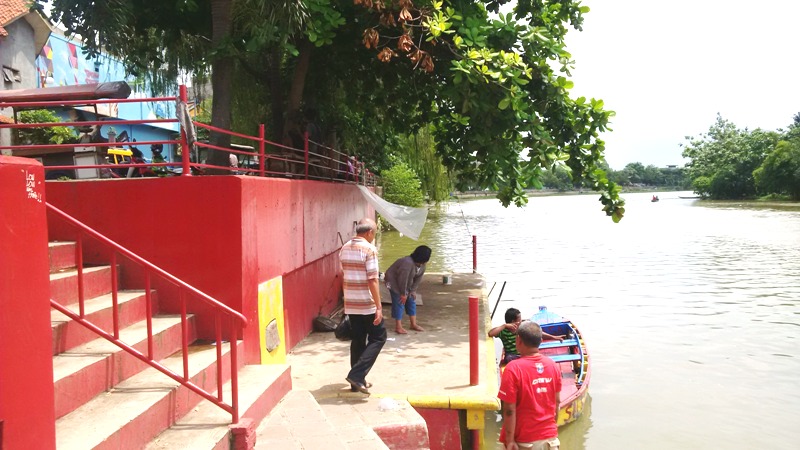 A few meter from Tangga Ronggeng  was another dock. It was constructed for people that wanted to go to vihara Boen Tek Bio. In the course of time, people used the dock to defecate so it was called  Tangga Jamban. The dock Tangga Jamban and a small shrine were originally built in 1873 in  a collective way by the Chinese community.

Now Tangga Jamban is painted red and is still used by the people to cross by the boat to the other part of the river.

The remnants of  the history of  Chinese first settlement in Tangerang are left few. The early Chinese community built vihara (pagoda) for worshiping and praying. One of the first pagoda is Boen Tek Bio which was collectively constructed at about 1684 with the workers coming from China.  It is also called the vihara of wisdom. There is a tradition that this vihara performs every 12 years which is called Gotong Toapekong (Carrying Toapekong). Every  dragon year of the Chinese calendar the vihara community make a procession in Tangerang carrying the toapekong. 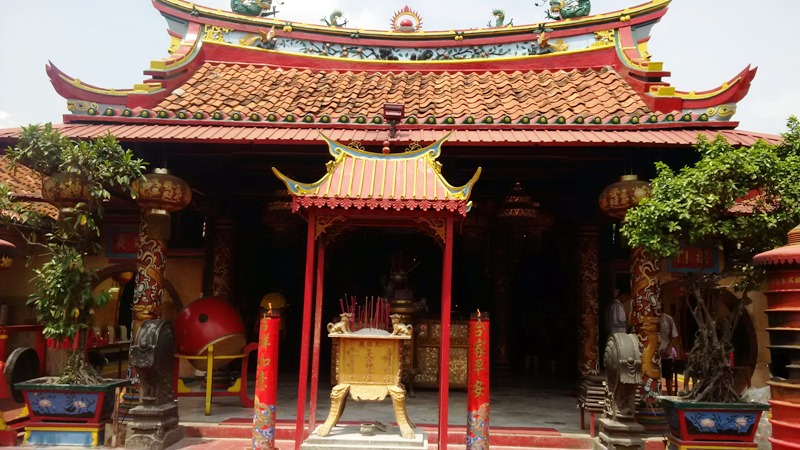 The workers of this vihara were brought from China. Boe Tek Bio vihara.

The Chinese community have now settled in Pasar Lama area and spread to the current Stasiun Tangerang.  Pasar Lama is the heart of China Town of Tangerang. The shops are housed in the buildings that have changed for generations. The road section in the current Pasar Lama remains the same like in the original layout. 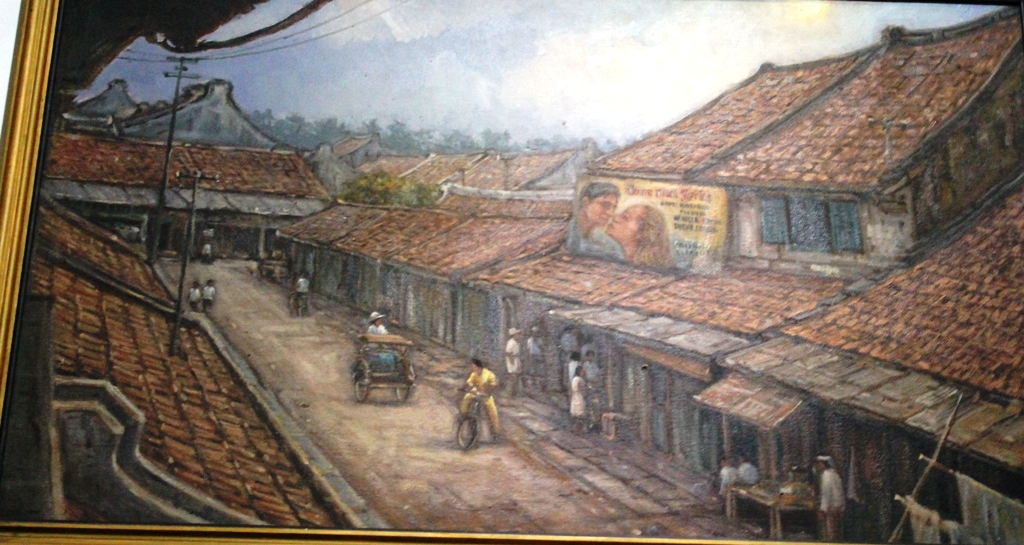 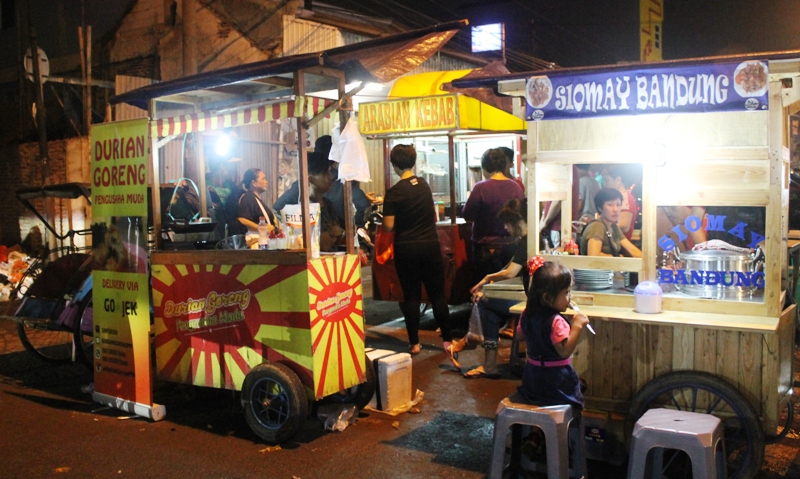 Any food you want can be found in the street food of main street of Pasar Lama.

The location of the museum is in the middle of Pasar Lama Benteng.  It was first opened in 2011. The museum is a renovated house of  a 17th century traditional Chinese building. It used to be a house of an association and one of the biggest houses in Pasar Lama. Pasar Lama Tangerang in the old time, on tall house on the left now houses the Benteng Heritage Museum.

The renovated architecture of the museum is impressive. The owner, Udaya Halim, had put a lot off efforts to convert it to be a museum. The collections that are located mainly on the second floor are invaluable from the old games to the wedding gowns.  The museum offers a 45-minute tour with Rp 20,000 entrance ticket. However, no photography is allowed inside the museum. It is worthy to join the tour since the guide will tell about the architecture of the house, the history of Tangerang as well as the collections of the museum.   It is the only museum that offers the history of Benteng Chinese A place to learn about Benteng Chinese in Tangerang and Peranakan Chinese culture.

Opening hours 10 am to 5 pm (Tuesday to Sunday)

The three-floor building in the area of Pasar Lama is eye catching in terms of architecture as well as  its  yellow painting.  According to Udaya Halim who owns and manages Museum Benteng Heritage, the house used to be one of the biggest houses in the area.  He had restored the building that is now used to hold special events. The house has been used several times for events like the Cap Go Meh festival. Roemboer Tangga Ronggeng, a Chinese architecture house that had been renovated in Pasar Lama area of Tangerang.

Cap Go Meh celebration was held in Roemboer Tangga Ronggeng Pasar Lama on February 21.  It was organized by Museum Benteng Heritage, the theme of Cap Go Meh celebration in 2016 was to celebrate the harmony between the generations of Benteng Chinese and the locals. It was a by invitation event.

With regards to the theme, the celebration was focused on the acculturation between the Chinese and Indonesian culture which in Tangerang has generated Benteng Chinese community and tradition.

The shower that fell ahead of the celebration was considered a blessing for the Chinese. The alley to Roemboer Tangga Ronggeng was red carpeted, red and white umbrellas lined on both sides of the alley and  the lanterns were hung along the way.  It was merry despite of the cloudy sky. 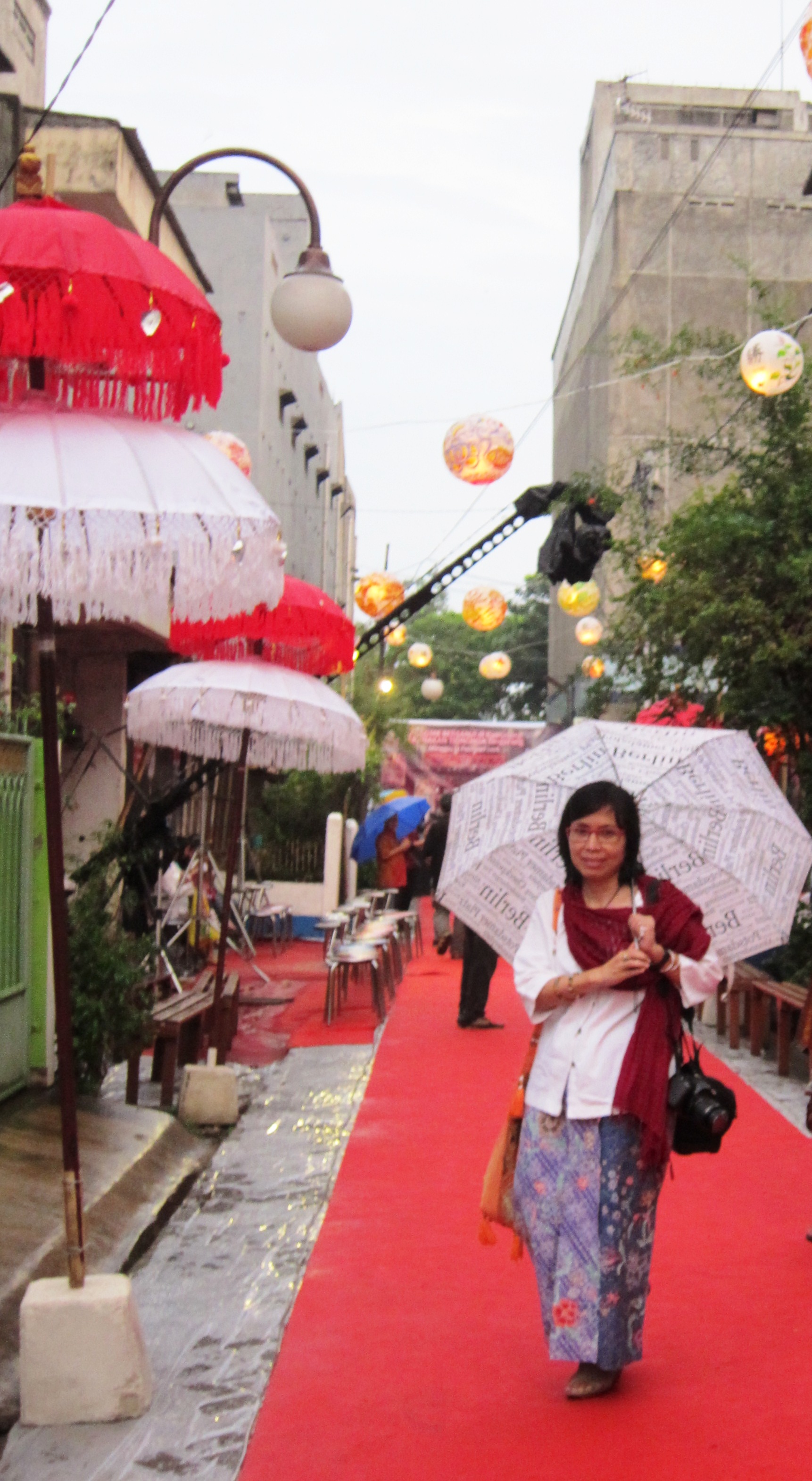 Laksa is Peranakan food, a blend of Chinese and local culture.

The interesting part of the celebration was when Udaya Halim who organized the festival made a presentation about Tangerang in the old time, the history of the first Chinese that came to Tangerang as well as some acculturation between the Chinese and the locals that have lived in the community for the generations. 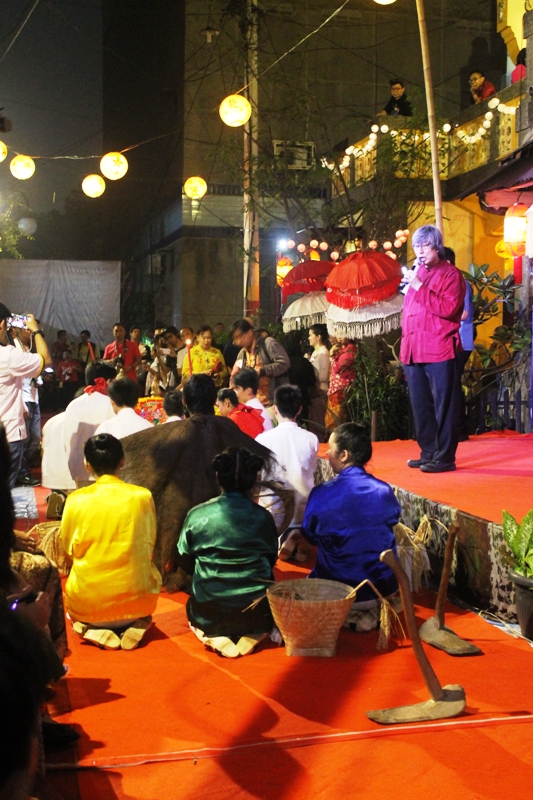 A drama depicting how the Chinese people first came to Tangerang where an exchange of culture has occurred.

There was a performance of gambang kromong  that was performed by young students. Gambang kromong is a traditional orchestra that blends the local (Betawi) and Chinese culture. Gambang kromong is an orchestra that has Chinese and local (Betawi) elements.

Saman dance, a traditional dance from Aceh, Indonesia, was beautifully performed by the girls of Chinese descendants, a drama featuring how the Chinese first came to Tangerang as well as the barongsai dance were also performed. The girls performed Saman Dance, a traditional dance of Aceh.

How to get to Pasar Lama Tangerang

For people in Jakarta, the easiest way to go to Pasar Lama is by commuter line http://www.krl.co.id/Info-Jadwal-KA-Commuter.html Some Chinese Loanwords in Bahasa Indonesia

Here are some of them: botak (bald), jitak (hit on the head), pitak (partly bald on head), paku (nail), palu (hammer), pasak (nail made of wood)

Many of these Hokkien loanwords are related to food, kitchen and fashion