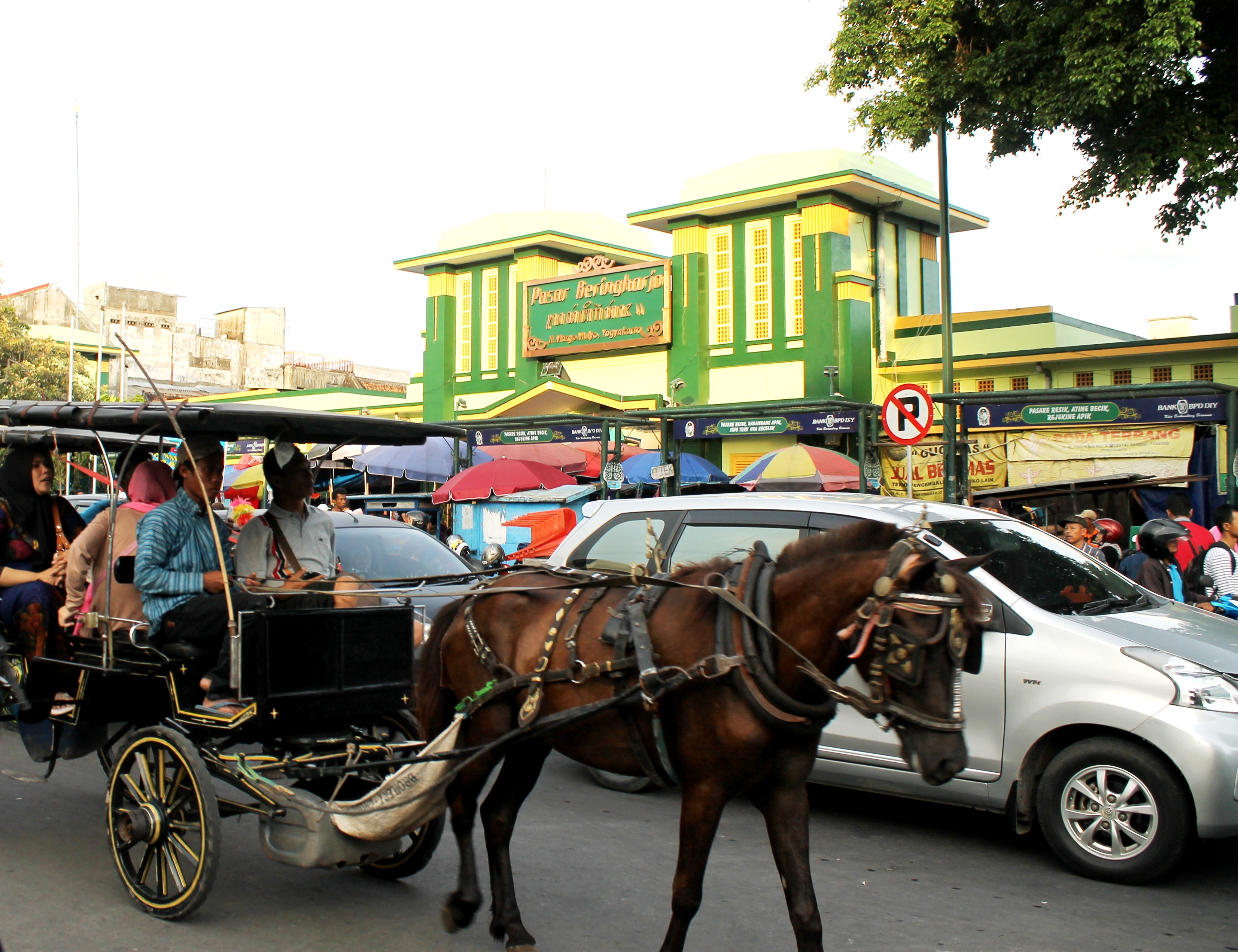 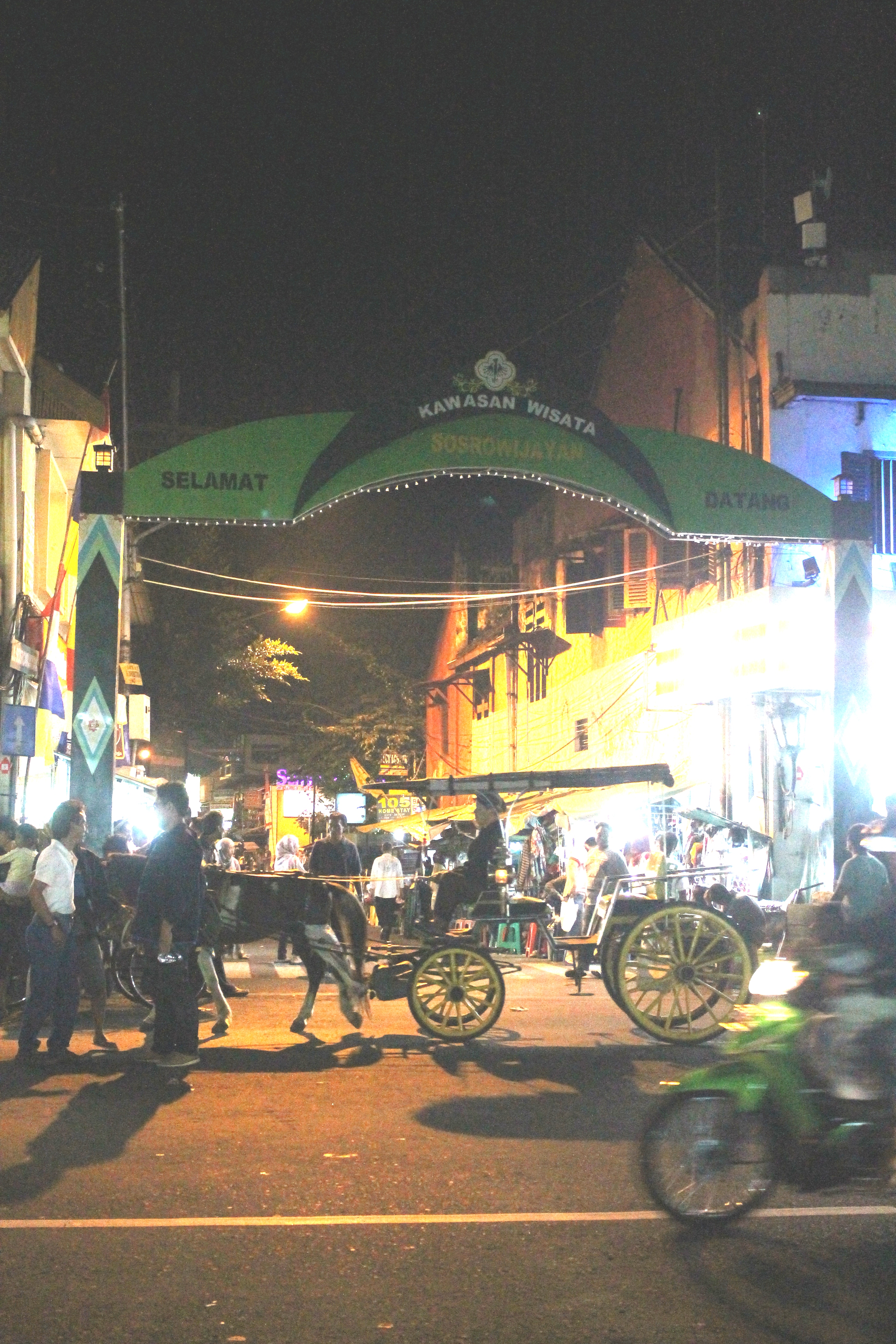 On Jalan Malioboro there are branches of alleys that cater the need for the tourists such as lodgings, shops, restaurants.

Kraton/Palace Sultanate of Jogjakarta that has ruled  Jogjakarta since 1755 has the concept of city layout that is loaded with philosophical meanings.   The city layout is based on an imaginary north-south axis. This axis connects between Mt. Merapi in the north and Parang Kusumo Beach of Java Sea in the south and Kraton Palace is situated in the middle of them.  This carries a philosophical meaning where Mt. Merapi in the north symbolizes fire and Parang Kusumo Beach on Java Sea in the south symbolizes water. And Kraton/Palace Sultanate of Jogjakarta is situated in between as a balancing point. 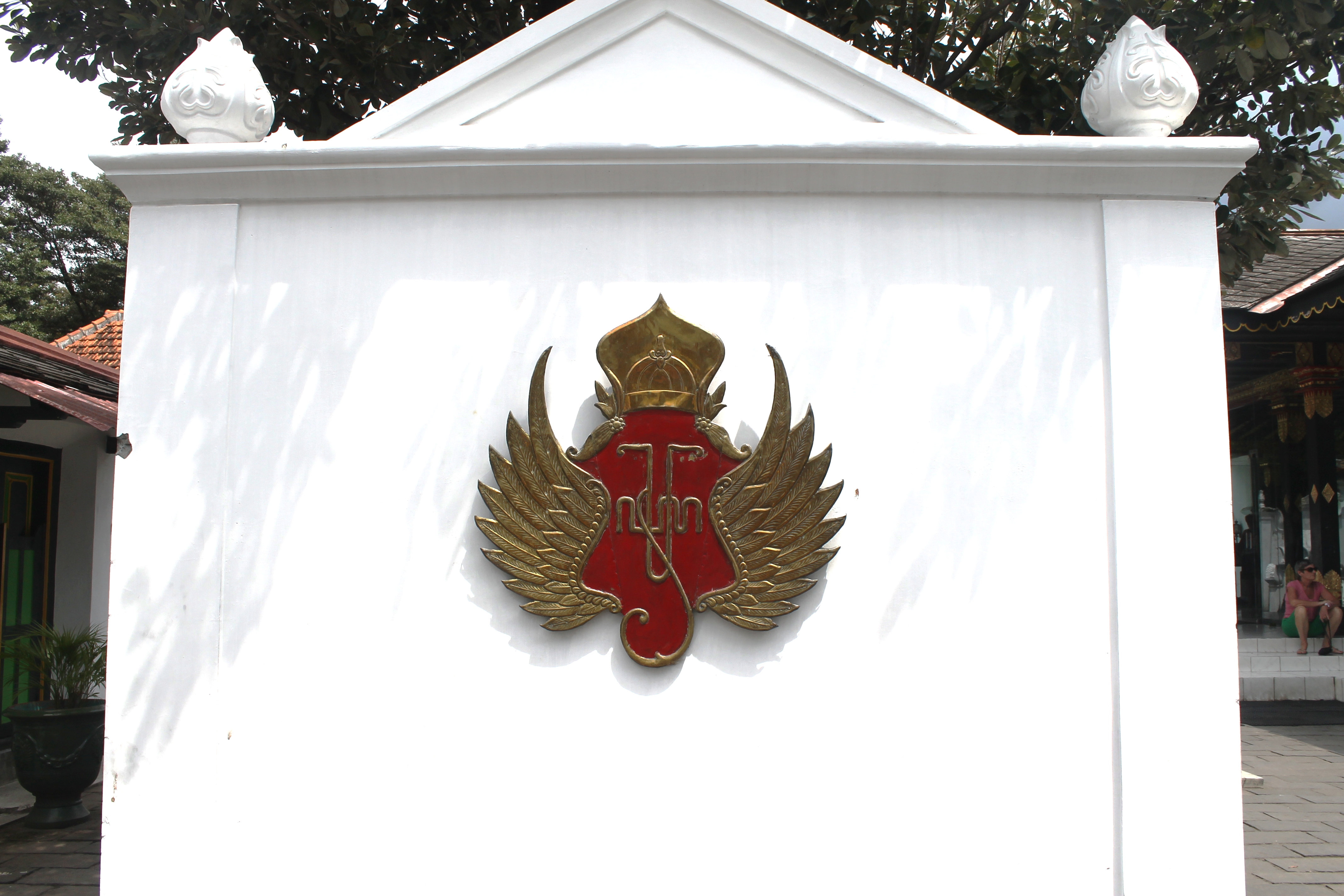 Symbol of Kraton Sultanate of Jogjakarta

The above mentioned concept of philosophy was put forward by the first Sultan of Kraton Kasultanan Jogjakarta, Sri Sultan Hamengku Buwono I. The philosophy brings together the Javanese and Islamic values.

The business life in Malioboro Street started to flourish in 1916  with the establishment of Chinese settlement and business in the area. Tan Jin Sing  (Raden Tumenggung Setjaadiningrat)  (1760-1831) was a captain that had become a bridge man between the British Raffles and Kraton Palace. The Sri Sultan Hamengku Buwono III granted a property land in Malioboro area for Tan Jin Sing. The land developed into a Chinese settlement, which is currently known as Kampung Katandan. The Chinese people who lived in the settlement were merchants and traders. The Chinese could not do business in Kotagede as the business was closed for them as there had been local merchants of Kalang people and Muslim groups of Muhammadiyyah organization. Therefore, the Chinese moved to Malioboro Street and started their business there. 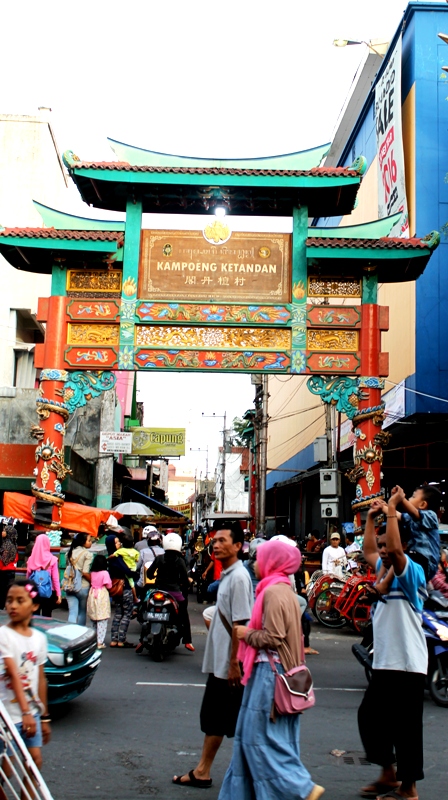 Kampung Ketandan, a Chinese settlement in Malioboro, where the business started to flourish in the past.

They built shop houses along the street selling groceries, textiles and gold.  The economic life was becoming bigger when Kraton built Pasar Gede (now Pasar Beringharjo) in 1925. The business area then expanded to the north (Tugu Train Station).

As such, culturally Malioboro Street had been a mix of Javanese and Chinese influence.

Pasar Beringhardjo is the oldest traditional market in Jogjakarta. Its establishment is both historic and philosophical.  In line with the Catur Gatra Tunggal Javanese concept of a city, where a city should have four elements politics, social, economic and spiritual;  right after the establishment of Kraton/Palace of Sultanate Jogjakarta a market as a place for business transaction of the people in and around Jogjakarta was made. In 1925 the market place was made into a permanent building by Kraton and it was called Pasar Gede. Sri Sultan Hamengku Buwono IX renamed the market Beringharjo which means the banyan tree (beringin) that can bring welfare (hardjo) to the people. Back to the history, the area of current Pasar Beringharjo used to be the forest of banyan trees. The market was renovated twice in 1951 and 1970.

The main entrance of Pasar Beringharjo. 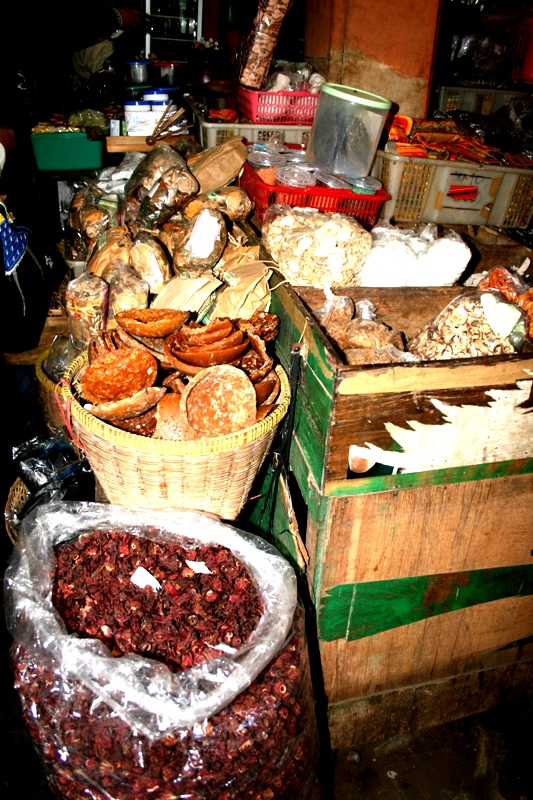 Opening hours: Everyday 9 am to 5 pm. The traditional food and snack vendors outside the market buildings open at 6 am. 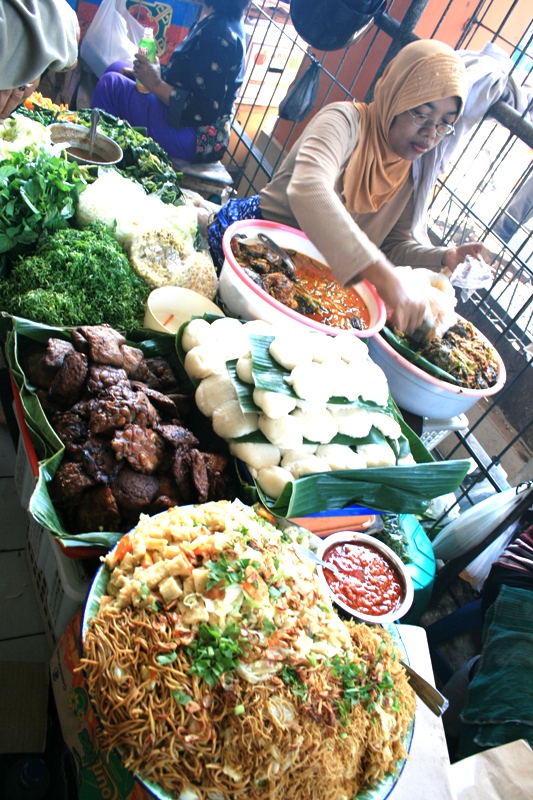 Location: Malioboro, next to Vredeburg Fort.

Along Malioboro Street you will find the street vendors selling all kinds of souvenirs, batik, clothes and knickknacks. The quality is so so, be careful to select the items before you buy. The street vendors in Malioboro are not local people. They are migrant people from other parts of Indonesia that do their business in Jogjakarta. Use your bargaining skill when shopping in the street vendors as the price is not tagged. 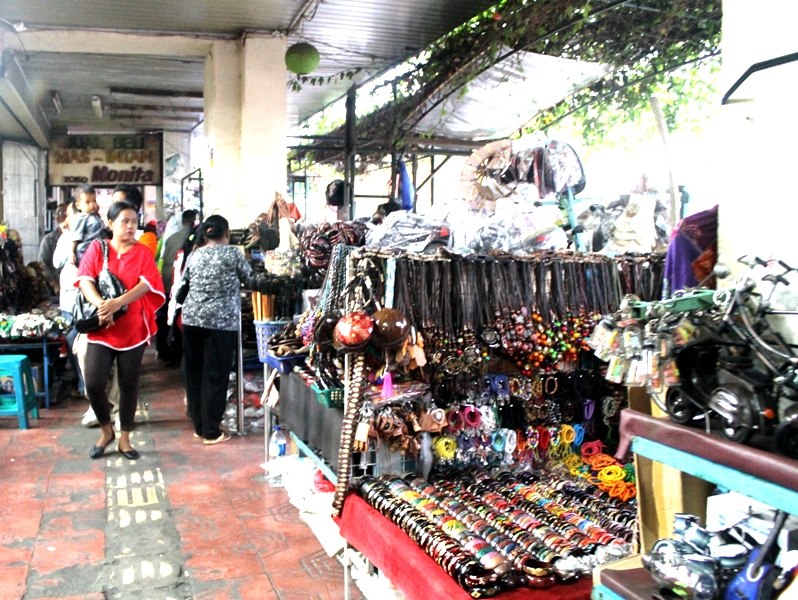 Street vendors in front of the shops along Malioboro Street.

As you walk down the street, many becak (pedicab) drivers offer their services to take you to the tour around Kraton and buy batik in the shops there. They offer the price as low as Rp 5,000. Bear in mind that on the way they will take you to the shops where they will get commissions from the shops if buy something. If you don’t buy anything they may ask you additional fares. Make sure before taking becak to make the negotiation.

If you stay in big hotels and want to ride becak, it is safer to take ‘becak hotel’. The drivers have received training and they should follow the rules of their association.

Malioboro is one of the favorite destinations for the people to celebrate New Year. Visiting Jogjakarta by the end of the year meaning competing with others to get hotels, flights, seat in the eating places as well as transportation. Despite surcharge for hotels during the peak season, the hotels in and around Malioboro have been fully booked in advance, so you will not get the rooms if you book it last minute.

Visiting Malioboro by the end of December also means walking elbow to elbow in the street as people, young and old,  flock to the area since the morning time. If you like the crowd, this is your place, otherwise you better escape from the area. 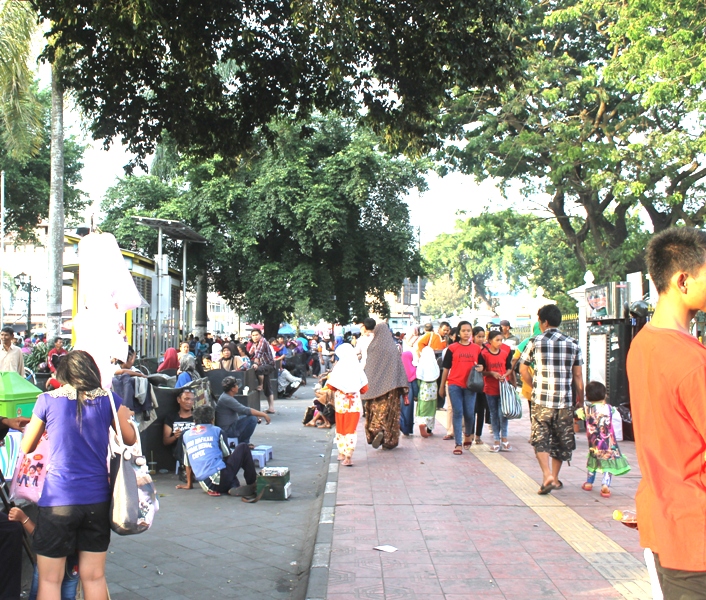 The area in Malioboro ahead of New Year.

In addition, since the number of people seems to be uncontrollable they dispose the trashes as they wish which makes some parts of the street dirty.

How to get to Malioboro

Alight at the Malioboro 1 Bus Stop