Peh Cun Celebration  on Ramadhan in Tangerang, Indonesia. This year Peh Cun celebration coincided with Ramadhan, the holy month of Muslims.  How was it?

The alley in front of Boen Tek Bio vihara, the oldest vihara in Pasar Lama of Tangerang , was a bit crowded.  Tangerang is a city about 18 kilometer in the west of Indonesia’s capital Jakarta. The vendors lined both sides of the alley selling  food and drinks. Besides the halal food there were also some non-halal dishes.  Many of these vendors are the residents of the neighborhood. In conjunction with Peh Cun celebration, this ordinary alley  was converted into a food market for two nights. 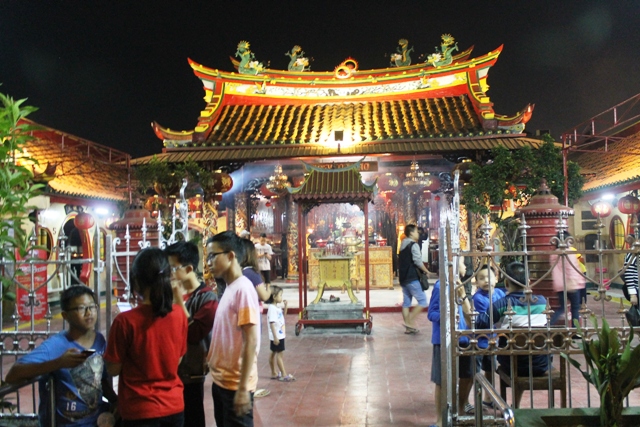 Pasar Lama Tangerang is located in Tangerang’s Old City,  which is popularly called China Town (Pecinan).  The residents of Pecinan are the fourth generations of the Chinese people who first came  to Tangerang.  Many of them have intermarried with local people of Tangerang. The group of these Chinese people is called Chinese Benteng (see my article about Chinese benteng https://writerwkamah.com/indonesian-chinese-celebrating-cap-go-meh-with-benteng-chinese-in-tangerang/). 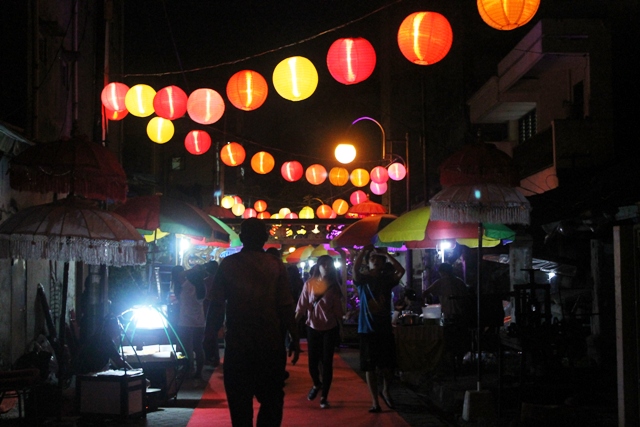 Peh Cun  is one of the  important celebrations for Chinese people. In Hokkien, it means rowing the boat.  The celebration originates from a legendary story of Qu Yuan. Qu Yuan was a  minister, scholar and poet in the ancient state of Chu during the warring state period (455-211 BC) in China. People loved him for his articulate attitude. Qu Yuan wrote poems  in books such as Songs of Chu, The Lament (Li Sao),  Nine Chapters (Jiu  Zhang) and Heavenly Questions  (Tian Wen). These masterpieces are invaluable books to study  the ancient Chinese literature. 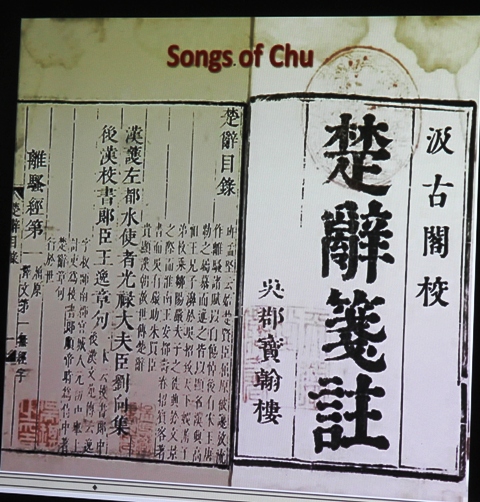 Qu Yuan was unfortunate that he lived in the time of the corrupt Emperor who Qu Yan protested against. The Emperor accused Qu Yuan treason and forced him into exile.  Being in exile and upon seeing the deprived situation in his country, Qu Yuan had become so frustrated. One day, he rowed a boat to the middle of Mi Luo River.  He was singing his own poems about his love to his country and people.  Then he threw himself into Mi Lou River, according to the legend, on the fifth day of the fifth month of Chinese lunar year.

As soon as people knew about it,  they tried to help him and seek his body in the river using their boats. But they failed and his body was never found.  As an expression of their love to Qu Yuan, the people threw  bak cang to the river. They hoped that the fish would eat bak cang instead of Qu Yuan’s body.  Bak cang is a rice cake wrapped in bamboo leaf. 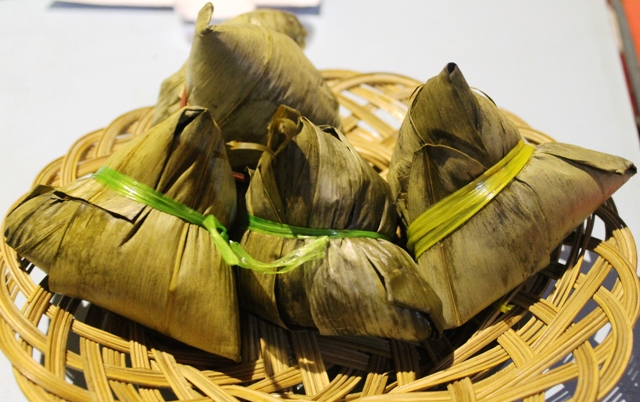 Since then the Chinese people have commemorated the spirit of Qu Yuan with the dragon boat festival and eating bak cang  on the fifth day of the fifth month of Chinese lunar year.

The natural phenomenon  on the date is the parallel position of both earth and moon in their orbits. On this day, the sun shines the most intensive.

It was Saturday night of holy Ramadhan, a fasting month for the Muslims in the predominantly  Muslim populated city of Tangerang.   The celebration of Peh Cun in Pasar Lama Tangerang went on as planned.

The alley in front of Boen Tek Bio vihara leads to Roemboer (Roemah Boeroeng), a house where Peh Cun celebration was concentrated.  The bright hanging lanterns decorated part of the alley to Roemboer.  On the second floor of Roemboer, there was a small exhibition  of old cameras and records.  The exhibition highlighted the role of Chinese community  on the early time when Indonesia’s national anthem Indonesia Raya was composed. 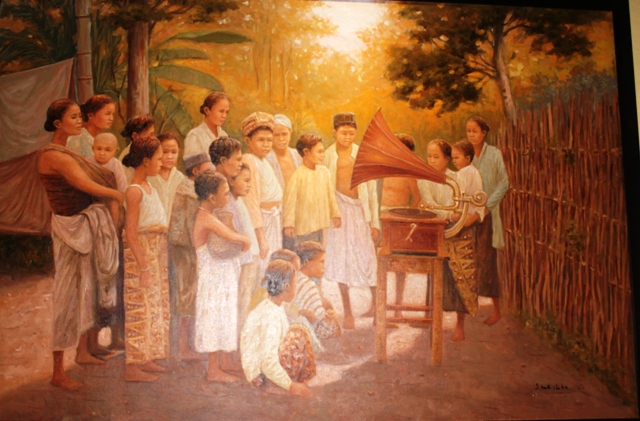 Hearing a record played by gramophone together. Exhibition of old camera and gramophone for Peh Cun celebration

On the third floor, a calligrapher was ready to make a Chinese calligraphy of  your name for some hundred thousand rupiah.  A table of  food with bak cang as the main dish was provided. Visitors who wanted to see the exhibition and to eat  bak cang and other dishes paid entrance fee to Roemboer.

Outside Roemboer,  senior Chinese ladies in their kebaya encim were dancing tuning in with gambang kromong music on the stage. The spectators were happy as well as excited to see them. Seeing them dancing, nobody can tell how old they actually are. 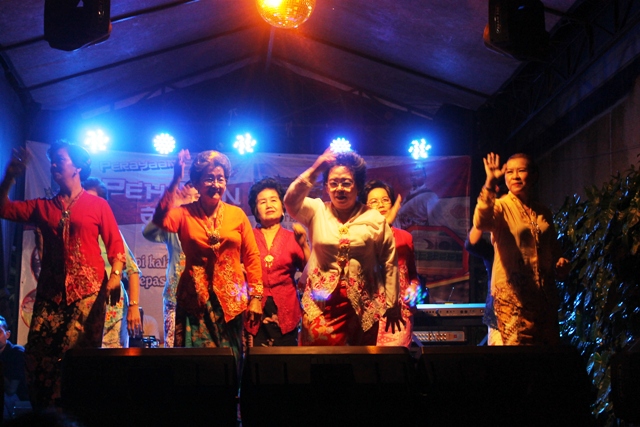 Peh Cun Celebration in Tangerang with performance of dancing of senior ladies.

The entertainment included  band performance and a short drama by the students of  Princes Creative School of Tangerang.  The drama depicted the important segment of Qu Yuan’s life .

In Tangerang area, Peh Cun has  been celebrated since the Chinese community first came in 1407 and  lived along Cisadane River. The history book of Sunda Tina Layang Parahyangan described about it.  And the descendants of this first generation have continued the tradition  until now.

Udaya Halim the owner of Museum Benteng Heritage has collaborated with Perkumpulan Sosial dan Keagamaan Boen Tek Bio Vihara to celebrate Peh Cun.  This year Peh Cun occurred on June 9th  and it was celebrated with the boat race on Cisadane River with local community participation.

On this year celebration, Udaya took chili pepper as the theme.  “Chilli pepper symbolizes honesty.  You taste the hotness of chili pepper as prompt as you eat it.  It also symbolizes loyalty as chili pepper is always present in every house (of Indonesians),” he added.  Both honesty and loyalty are two messages that Qu Yuan had carried.  Literally the chili pepper was translated in several  bak cang that was cooked and blended with chili pepper,  which gave burning sensation in the mouth. 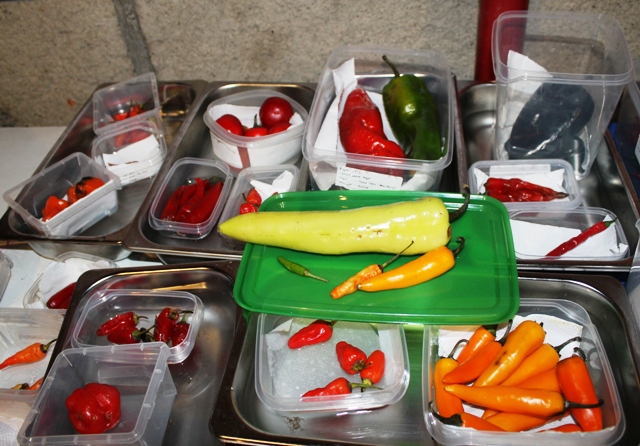 I left the venue while the band was still playing, being with the Chinese community celebrating their festival on the night of Ramadhan left  with me a positive sensation: celebrating the diversity!