Rejuvenating with the Southeast Asian Arts at National Gallery of Singapore 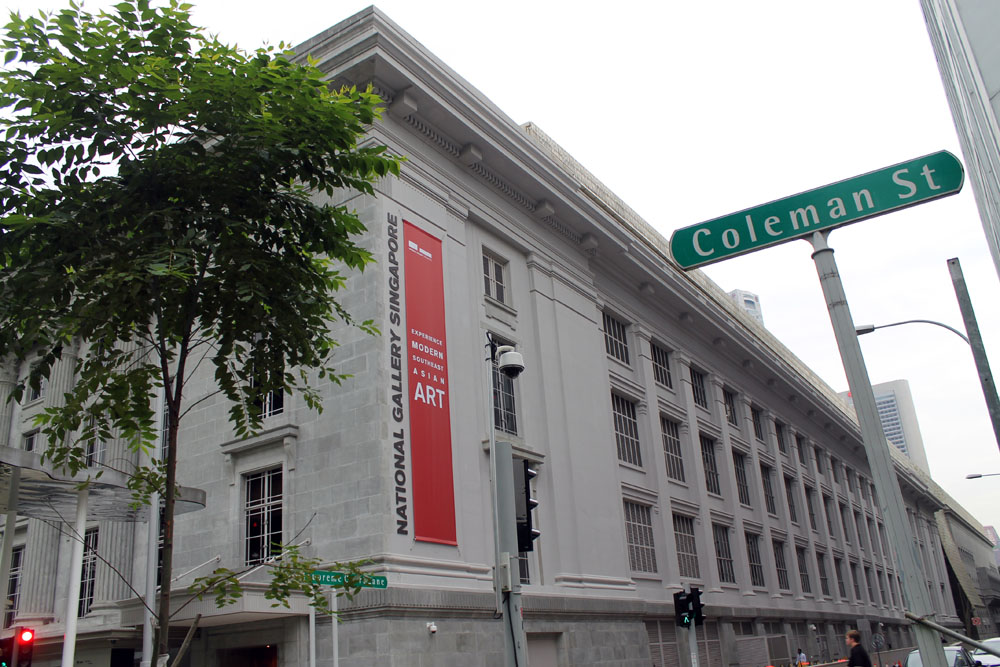 When you  think of Singapore, all you have in mind may be Orchard Road, Marina Bay, Universal Studio or Mustafa Shopping Center.  As one of the prominent shopping galore and entertainment centers in Southeast Asia,  few people will think of Singapore as a hub of museums and galleries.

Singapore has been striving to be the center of contemporary arts in Southeast Asia in the last couple of years and there are many galleries of contemporary art in this garden city state. The most prominent one is the National Gallery of Singapore. If you happen to visit Singapore, it is recommended to drop by at the Gallery. 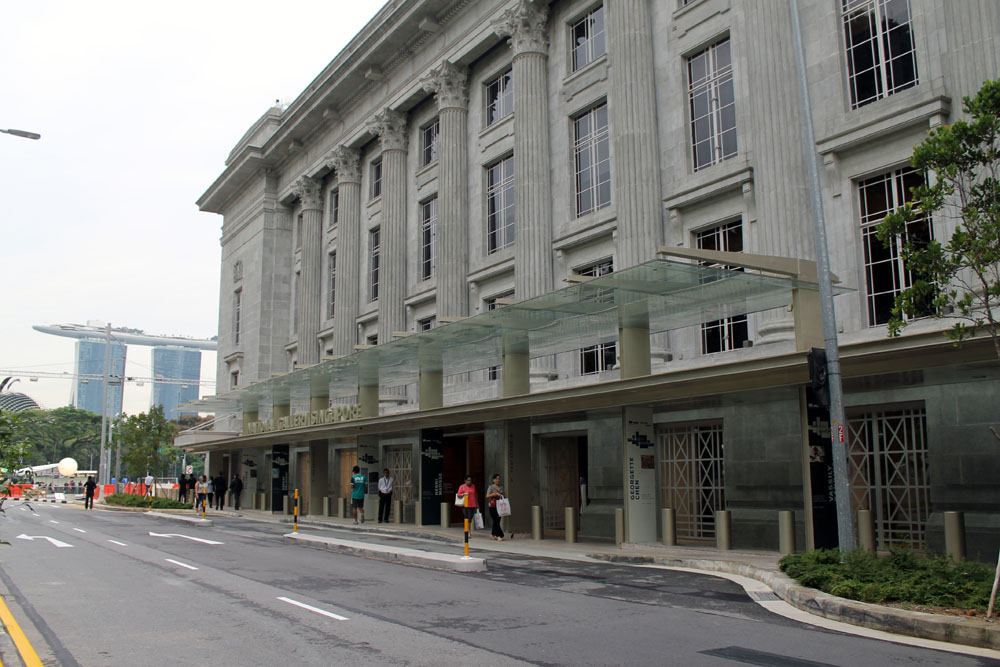 The National Gallery of Singapore is Singapore’s biggest gallery. It is housed in the former Supreme Court Building and City Hall–the national monuments of Singapore. The combined floor area of the Gallery is 64,000 meter-square. It is the home of  DBS Singapore Gallery and UOB Southeast Asia Gallery that hold permanent exhibitions.

The Gallery has vast invaluable collections of paintings. The collection includes around 8,000 works of modern and contemporary arts of Singapore and Southeast Asian countries from the 19th century to modern times. The Gallery also holds many active exhibitions throughout the year and it has projects that involve the community.

In my recent visit to the Gallery, I joined the  one-hour UOB Southeast Asia Gallery Highlights Tour, it is an excellent tour to get a general overview about the brief history of the Gallery and its collections. The guide explains some highlighted paintings, which is a kind of education session for lay people about arts and paintings.

Later on, I was stuck, in a positive way, at the UOB Southeast Asia Gallery in the former Supreme Court Building. I was mesmerized. The paintings and installations of prominent Southeast Asia artists are too beautiful to be missed in just one glance as they are both rejuvenating and educating. As a result  of limited time of visit, I missed visiting the DBS Singapore Gallery in the wings of City Hall. The Level 3 of former Supreme Court Building houses  11 galleries for the paintings and installation arts. The collections are divided into themes, which include the historical conditions and socio-political atmosphere of the Southeast Asian countries.  The fact that European countries colonized Southeast Asia countries in the past has inspired many painters in Indonesia, the Philippines, Malaysia, Myanmar, Singapore and former Indo China countries. It is fascinating to see  how the painters in those countries share the common colonial experience in their paintings. The internal political upheavals in each country are also portrayed in the art works of some painters.  The painters express similar concern in different styles which is obviously seen in some of their works.

I started my roaming in the Courtroom One that used to be the  original court room of Supreme Court when it functioned. The collections  in this room mainly relate to the items in  the advance of colonial time in the world and Southeast Asia. The exhibited items include the paintings, old manuscripts about the Southeast Asia history and  old world’s maps. 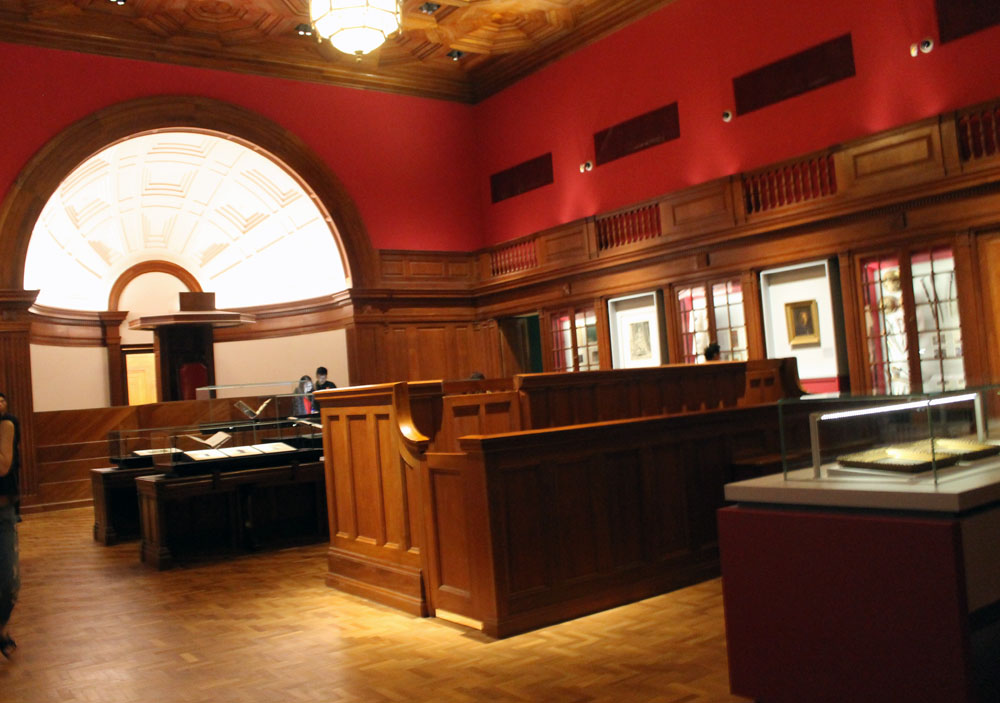 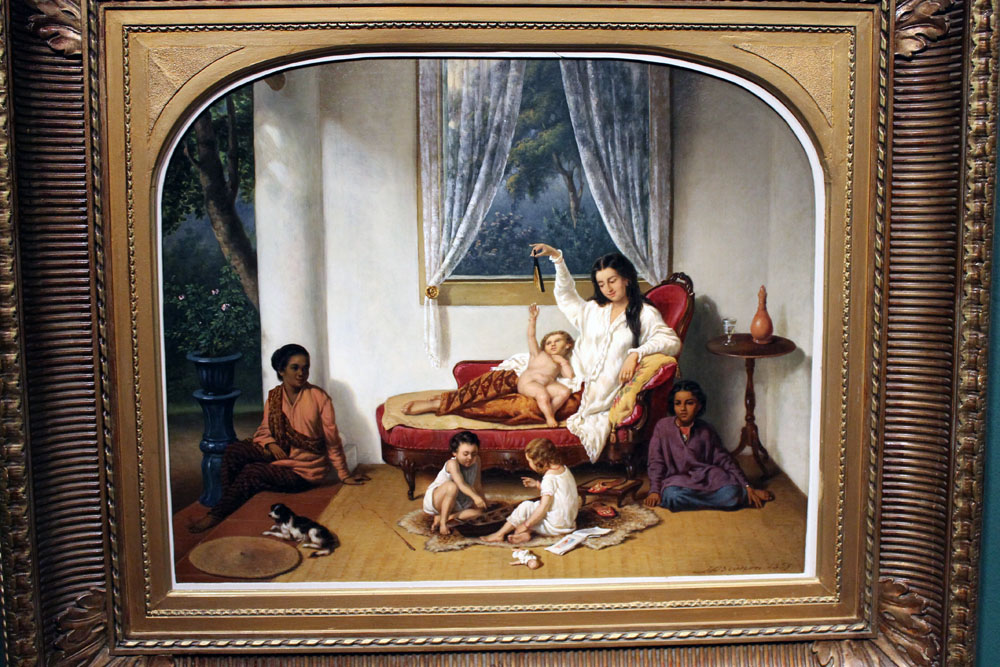 The painting on the life during the colonial time, National Gallery of Singapore

The time then revolves with the political uprising and civil wars in those countries that the painters detail in their canvases. For one reason and another, these paintings are bitter in their messages not to say painful.

Some paintings in the galleries are so stunning that I like to take a longer look to heal my hunger on the beautiful works. But like in other galleries in the world, no bench is provided for sitting.

It is not surprising to see the paintings of many well-known Indonesian painters or artists among the collections.  The artworks of Indonesia’s outstanding painter  Raden Saleh,  Affandi, R. Sudjojono–the father of Indonesia’s modern fine art and Entang Wiharso, to mention a few, decorate the  galleries. 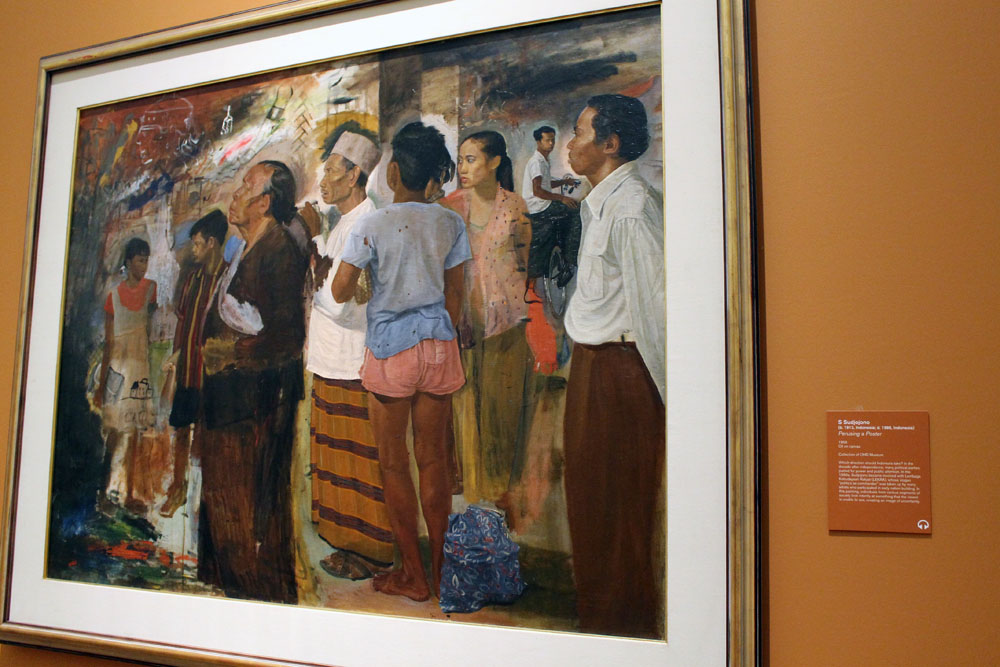 Visitor should not miss visiting the Rotunda Gallery. The former law library of Supreme Court shows the archival materials on arts in the region. The display is temporary. From 2015-2016 it is curated by Indonesian Visual Art Archive with archival books about Indonesian art in the shelves. Rotunda at National Gallery of Singapore

I spent more than 2 hours just browsing the galleries in UOB Southeast Asia Gallery and had only little time to enjoy the interior of the whole two renovated monument. 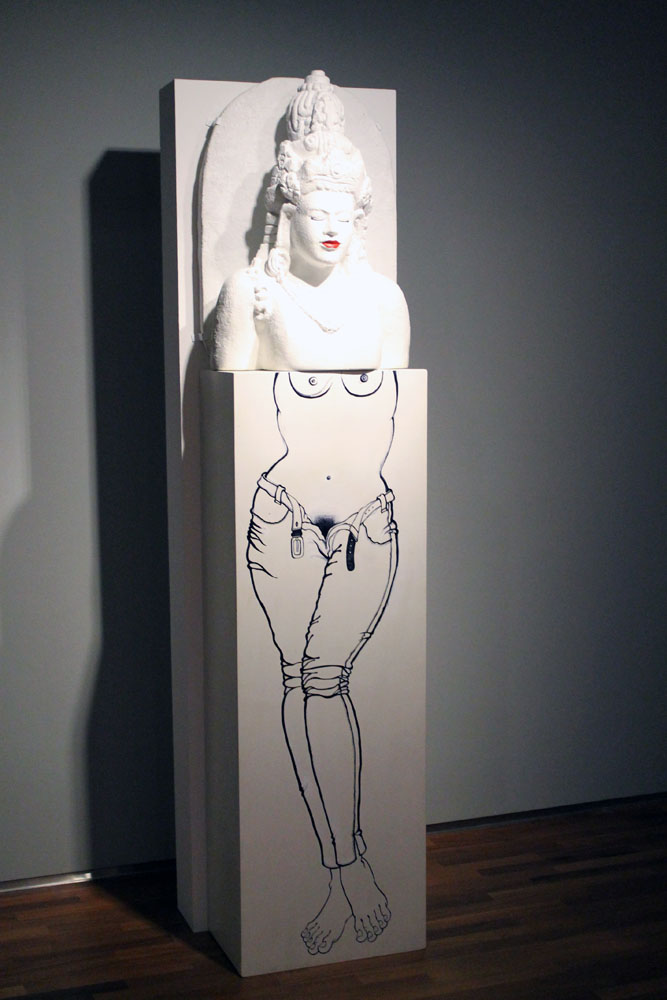 Seeing the  works of Southeast Asian maestros is truly rejuvenating including the whole Gallery itself whose architecture and interior collide the colonial and modern time in a refreshing way. 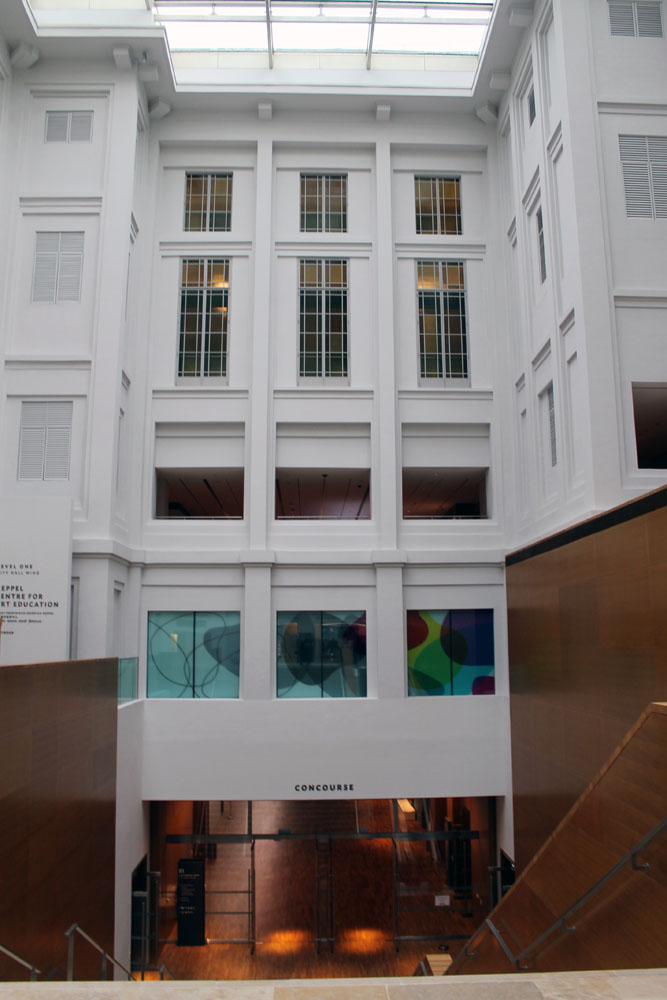 The Gallery is located in the heart of Singapore.  On Coleman Street , one of the accesses to Gallery, there is an Art Connector leading to the building. It is a platform  of sheltered walkway with the portraits of people of Singapore. 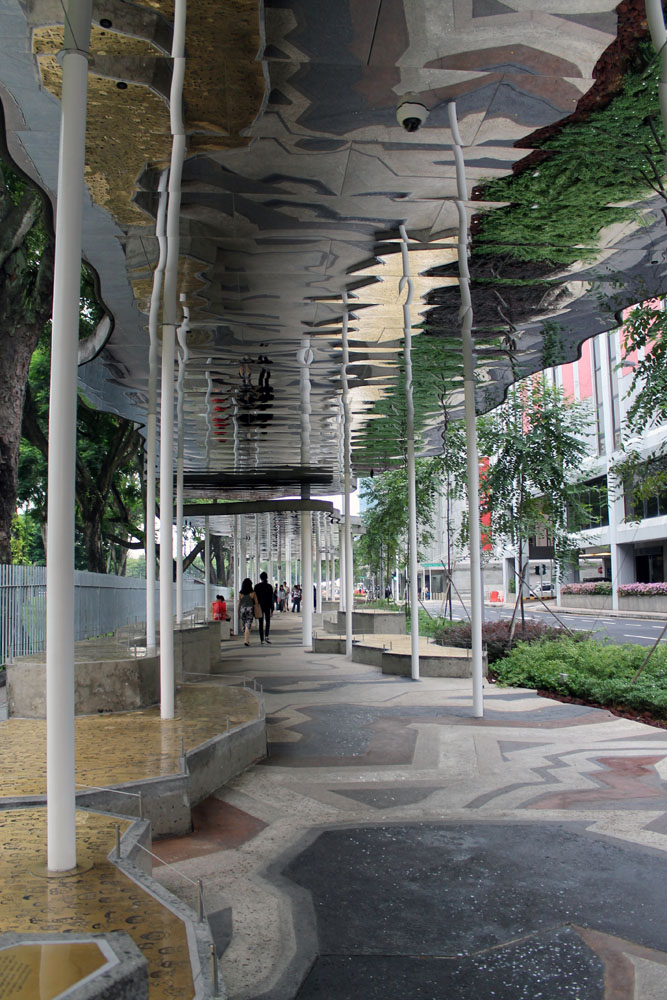 How to get there

From Changi Airport, catch the MRT to Joo Koon, get out at City Hall.

Take Exit B. From the exit gate, go to Coleman Street.

The Art Connector leads you the National Gallery Singapore.