Tabot, a Ceremony Where Cultural and Religious Values Meet 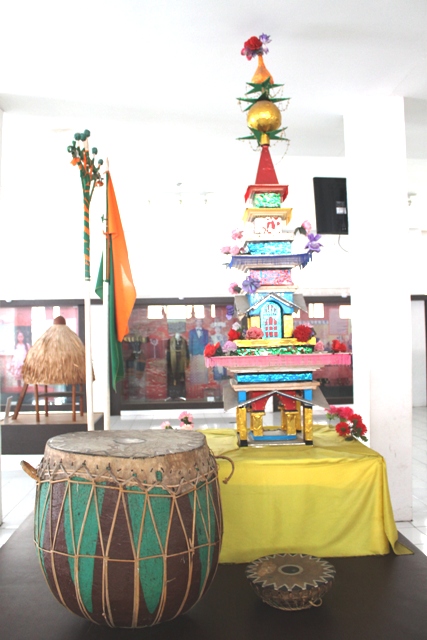 There are some traditions in Indonesia that are related to the historic events of Islam’s history. This tradition was introduced by the early propagators of Islam in Indonesia.  One of these traditions is tabot that has continued to be held in Bengkulu, one of the provinces in Indonesia.  The word tabot derives from taabut, an Urdu word that means coffin.

The early propagators of Islam in Bengkulu were estimated to arrive in the 7th-8th century. This was followed by the second wave of propagators that came in the 13-14th century. They were believed to be the followers of ahlulbayt (the progeny of Prophet Muhammad PBUH) that came from India. They tried to commemorate the heroic event, the battle of Karbala, that occurred on 10th of Muharram of 61 Hegira of Islamic calendar.

In the course of time, tabot ritual has been reduced to a cultural agenda for tourism. Currently, tabot in Bengkulu is listed in tourism agenda. And during the festival there are other cultural performances, competitions, and events. Despite the reduction of its meaning, the tabot family keeps performing the processions.

People lined on the main streets, from Jalan Ahmad Yani to Jalan Sutoyo in Bengkulu, the capital of Bengkulu Province,  since morning. Men and women, young and old, rich and poor looked enthusiastic. Street vendors of all types also made the atmosphere merrier. The whole  citizens expected something big and extraordinary passing through the streets. They were waiting for tabot. 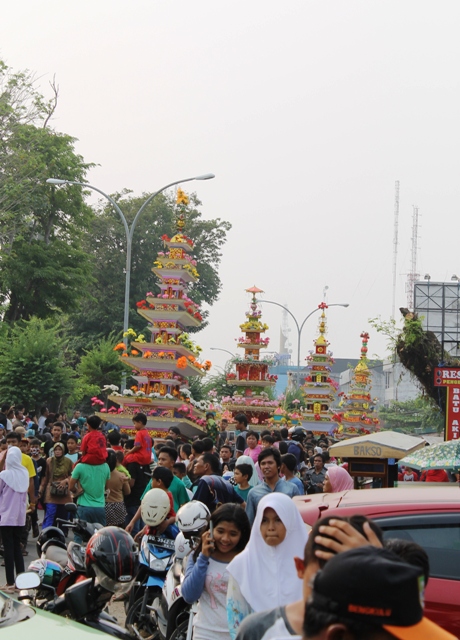 Every 10th Muharram of Islamic calendar, which fell on October 11th this year, the city holds Festival Tabot. It is a culmination of the 10-day ceremony.

In this festival, tabot represents the coffin of Hussein bin Ali. The whole rituals symbolize the act to collect the mutilated body parts of  Sayyidina Hussein, to carry and to bury them in Karbala’ Plain.

In the course of time, the meaning of tabot develops into a miniature  structure decepting a minaret made of woods and bamboo. This structure is adorned with colorful papers and ornaments.

The tradition of tabot in Bengkulu is believed to have started with the introduction of Islam in the area in 14th century. Syech Burhanuddin (Imam Senggolo), an Arab ulema, came to Bengkulu to propagate Islam. He married two local women. Syech Burhanuddin introduced the tabot ritual in commemorating the martyrdom of Prophet Muhammad’s grandson. His descendants have continued to hold the ritual until now.  Syech Burhanuddin was buried in Karabela Cemetery in Padang Jati, Bengkulu.

The ceremony is conducted by 17 groups of tabot. These groups indicated the first 17 families that performed tabot ceremony. The current groups are divided into two groups. The first group consists of nine groups of tabot Syech Burhanuddin or tabot Imam (sacred tabot). The second group comprises of eight groups of tabot Bansal. 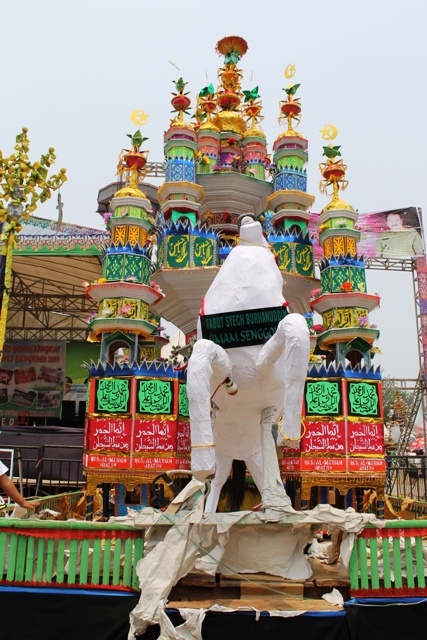 “You should come here from the 1st Muharram to see the whole procession,” Hermansyah, a member of tabot family, told me. “We prepare to make tabot at least one month in advance cooperatively,” said Hermansyah.  He said that in the past the cost to make tabot was voluntarily shared among the family members. In the last couple of years since tabot ceremony was in the list of cultural agenda, the local government has provided some funding.

Tabot ceremony comprises a series of rituals that are performed from the eve of 1st Muharram. These rituals have both Islamic elements and local traditions.

Mengambil Tanah: As a start, on the eve of 1st Muharram, the families of tabot perform taking soil ritual in two locations in Bengkulu. This symbolizes to collect the parts of Sayyidina Hussein’s body that was mutilated and scattered. It also symbolizes that men come from dust and will return as dust. The Tabot Imam group takes the soil in Gerga Suci by Panjang Beach, Bengkulu. Tabot Bansal group takes the soil in Gerga Tebing Tapak Paderi, Bengkulu. The sites for the soil should be sacred ones.

Duduk Penja: On 5th  Muharram the sacred item of tabot family such as penja is washed. Penja is five-finger hand form made of brass, silver or copper. Penja is considered a sacred thing. The ritual is a form of respect to Sayyidina Hussein. Before washing penja, they say prayer for Sayyidina Hussein and those who martyred in Karbala’. It is a symbol that when upholding  the religion of Islam one should be  clean.

Manjara: On 5-6th Muharram the two main groups, tabot Imam and tabot Bangsal, visit each other on the nights of 5th and 6th Muharram. The procession is followed by players of traditional percussion like dol and tassa and flag and banner carriers. The  two groups also  show their competence to play dol and tassa on the street. Menjara also symbolizes the war between Sayyidina Hussein and his companions against Yazid. The dol music is meant to generate spirit of fighting against Yazid troop. 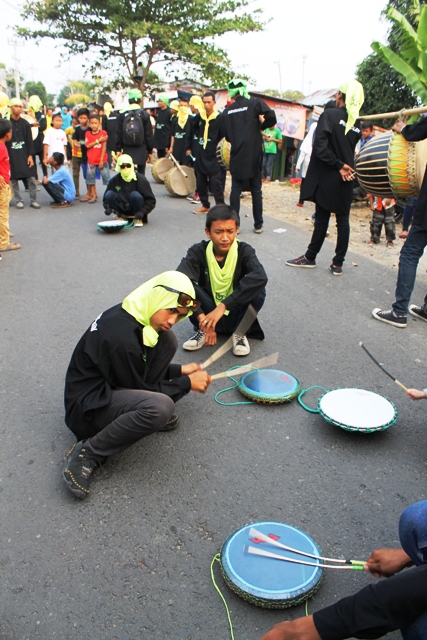 Tassa and doll are percusions that are played in the procession of tabot. Tassa is the small percussion, dol is drum like percussion.

Arak seroban: On 8th Muharram, the tabot family perform arak seroban where a symbolic white turban is carried on a small tabot. Penja and flags and banners printed with “Hussein” in Arabic calligraphy are also carried in procession. The procession is a symbol where the head of Sayyidina Hussein was found. In the battle, his body was mutilated and his head was slaughtered. 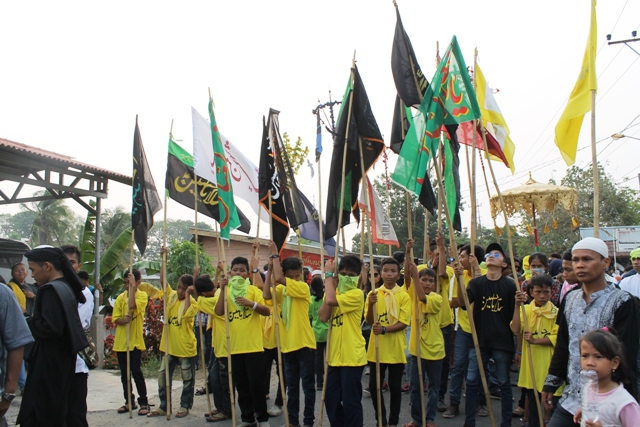 The banners and flags that are carried in the procession of tabot.

Gam: A period where all activities related to tabot ritual are stopped including playing dol and tassa. Gam is the period of queiteness as a show of mourning.

Arak gedang/tabot besanding: On 9th Muharram all tabots are brought to the main square. Before that there is a procession called Tabot Naik Pangkek where the bottom and top parts of tabot are connected. 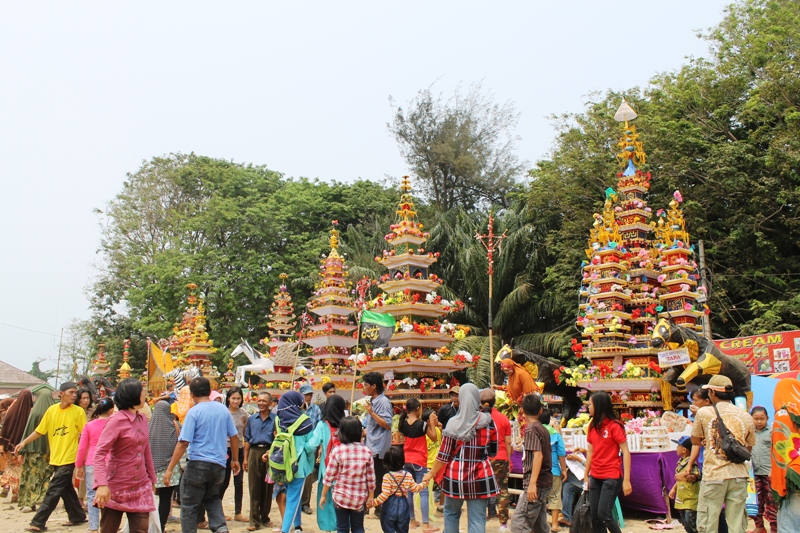 All tabots are brought to Lapangan Merdeka on the night of 9th Muharram.

Tabot Tebuang: Tabot tebuang is the procession where tabots are dismantled in the cemetery complex of Karbela. It is the cemetery where Syech Burhanuddin or Imam Senggolo was buried. It is the final procession of tabot ritual. It symbolizes that brutality, arrogance and the bad thing have been discharged. 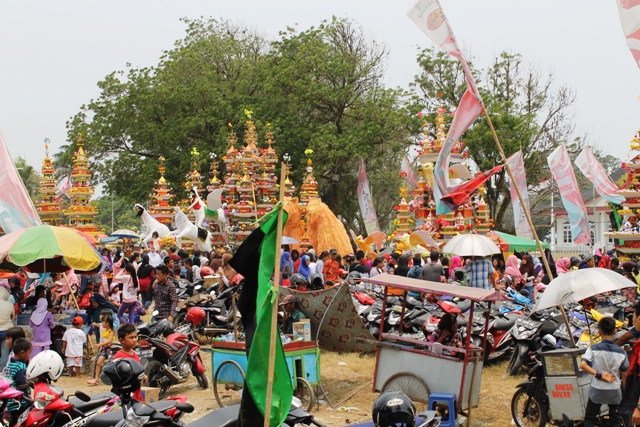 Lapangan Merdeka Bengkulu turns into a big fair where people come not only to see tabot but also see the exhibitions and performances and shop and eat.

The tabot festival attracts people across Bengkulu and neighboring provinces like Lampung and West Sumatera. Lapangan Merdeka had become so crowded that people had to walk elbow to elbow.

The tabot ceremony completes on 10th Muharram. All tabots leave Lapangan Merdeka and return to their original places. They pass the main streets and become the major attraction for the people. Four sacred tabots have to be discharged in Karabela. Karabela is a name of neighborhood that is adopted from Karbala’ Plain. 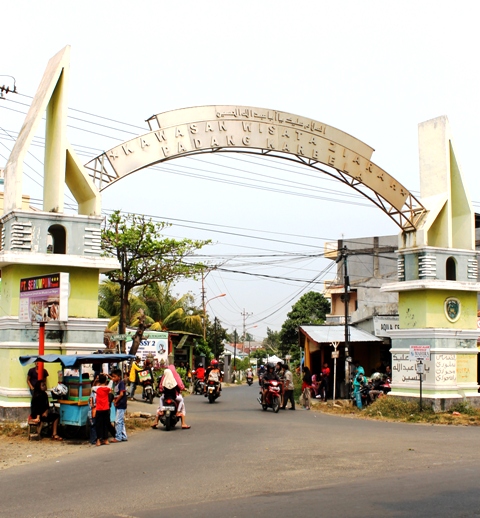 Guarded by the police, the procession of tabot was advanced by a group of youths. They wear black t-shirts printed with Arabic calligraphy  “Ya Hussain”. The youths carrying dols on their shoulder, flags, banners and jari-jari.  They play the music with mourning rhythm. Tabot Imam was on the front line of other tabots. Tabot Imam, which is the biggest of all sacred tabot, is beautifully decorated with a white horse model. Most tabot family members who participate wore black dresses symbolizing the atmosphere of condolence. People along the street look so excited seeing all the tabots. 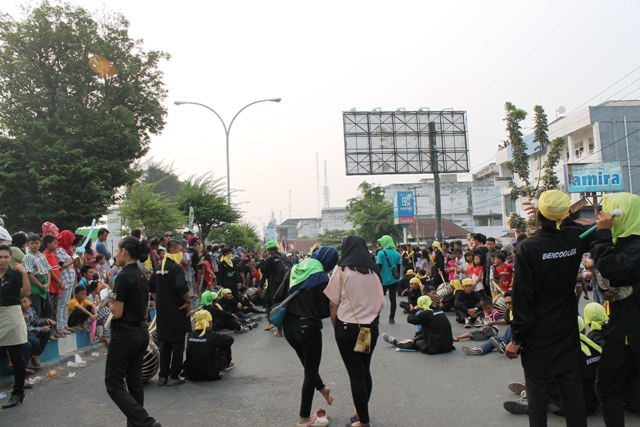 The procession of tabot Imam is started with a group of players of dol and tassa wearing black t-shirts.

In Karabela, there is a grave where Imam Senggolo was buried. A ritual of prayer is held in his grave which was attended by the tabot family members and watched by local people. The sacred tabots are then able to be dismantled. 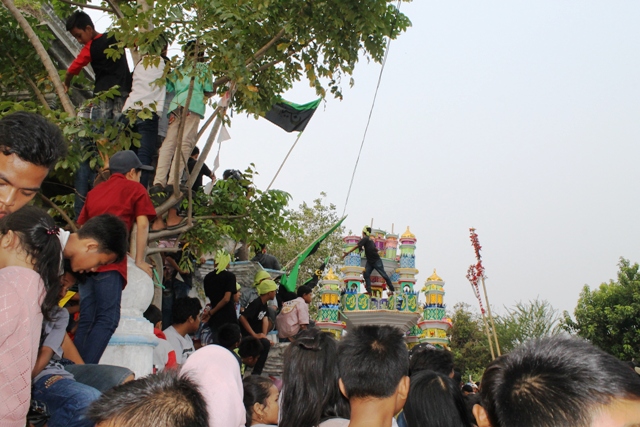 People are crowded to see the ritual in the grave of Syech Burhanuddin and how the Tabot Imam is dismantled.

Apart of its religious values, tabot ceremony demonstrates a local genius that has continued for many years  and loved by the locals.