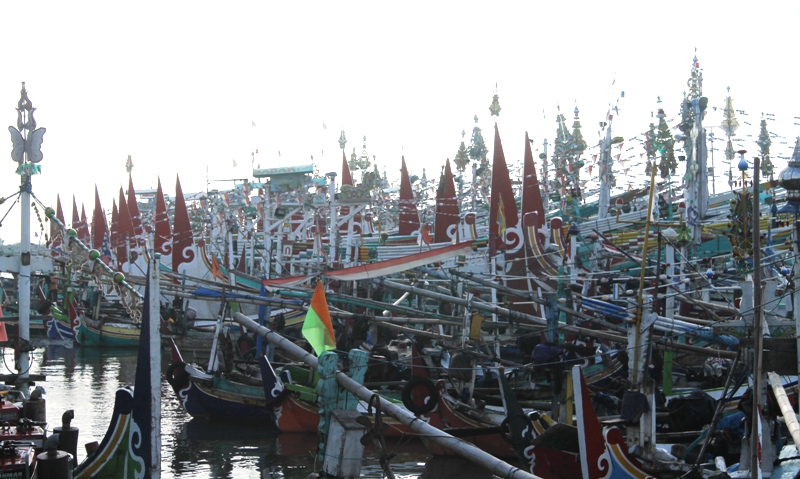 Karangasem Train Station in Banyuwangi, East Java, was dark as I got off the train. The tiredness of 8-hour train trip from Surabaya was gone as I stepped out the coach. The calls of prayers were hovering in the air amid the chilly weather. The man who picked me up called me saying that he’s been in the parking lot of the station.  He greeted me and led me the car. Then we left for our first destination. 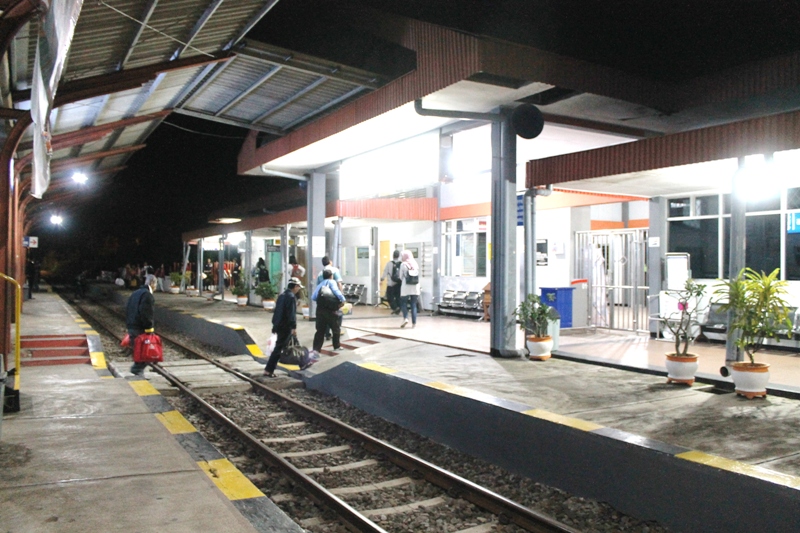 A senior tour leader in Banyuwangi, Mr. Aekanu Haryono, accompanied me for the trip. Lucky me. The tour to Alas Purwo National Park, Banyuwangi, East Java, starts with the visit to Muncar. We left for Muncar at 5 am. I felt excited as I have heard about Muncar and have seen the pictures of this fishing harbor. 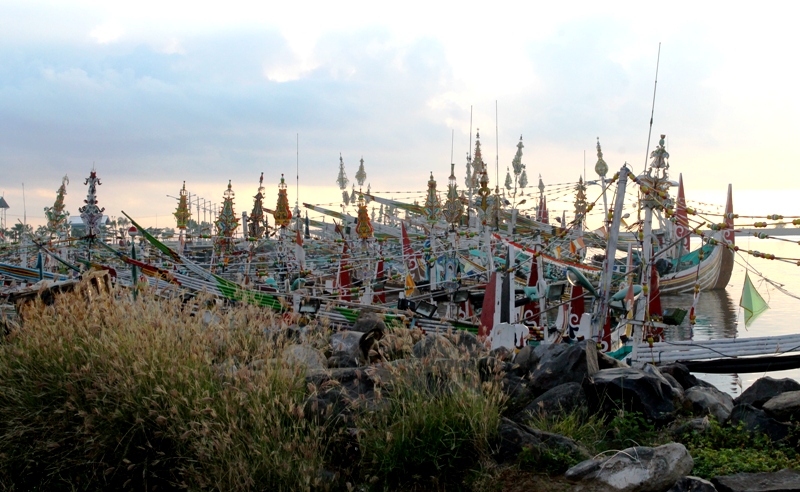 Muncar Fishing Harbor is located 35 kilometer in the south east of Banyuwangi City. It is the largest fishing harbor in Java and the second largest one in Indonesia.  Most fishermen in Muncar come from Madura Island. It is an island in the north off Surabaya, the capital of East Java Province.

The fishermen in Muncar live in the coastal area stretching about 50 kilometer. For them fishing is not only about taking the fish from the sea. Fishing is a ritual. It is part of their culture and life. They have inherited their traditional skill of fishing from generation to generation. For fishermen in Muncar, life is between the sea and the boat.

“The smell is usually so fishy here. My female guests are reluctant to go out of the car,” said Mr Haryono laughing. On that morning, the smell  was tolerable. Luckily, we were not coming on the rainy season.

We went to have a closer look at the boats and got an interesting story about them. The fishing boat in Muncar is called slerek, which is made of wood. The size differs from the small to big one. The small slerek  doesn’t use the engine.  The big boat uses the engine and the bigger the boat, the more it has the engine. A big slerek can accommodate up to 40 people.

The fishing boats always sail as a pair. They are called ‘husband and wife” boats. The husband or male slerek will carry the boat workers or nyelerek in local language.  The wife or female slerek will carry the fish that they fish. The male boat is slimmer than the female boat. The main task  of male boat is to hunt for the fish. In the male boat there is chair on top of the pole. It is for the captain or juragan laut to command the boat workers.  Juragan laut decides the spot to catch the fish. He also leads the boat. The boat workers  usually go fishing for 20 days. Then, they go home for 10 days. The fishermen of Muncar have fished in Bali Strait.

The slerek fascinates me. First, with its color and motif. The  sides for prow and stern are painted in traditional motif. The male boat has two poles on the prow and  the stern. In the prow, a small chair is set on the pole for the commander/juragan laut to lead the boat. A trident like protruding ornament decorates the other pole on the stern. Each boat has different  forms of protruding ornaments.  And these ornaments are attractive.  The combination of  the color on the boat makes me wonder that it is the work of an artist. Depending on the model and size, a pair of slerek in Muncar can cost Rp 1 billion. And the owner of these slerek is called  juragan darat. 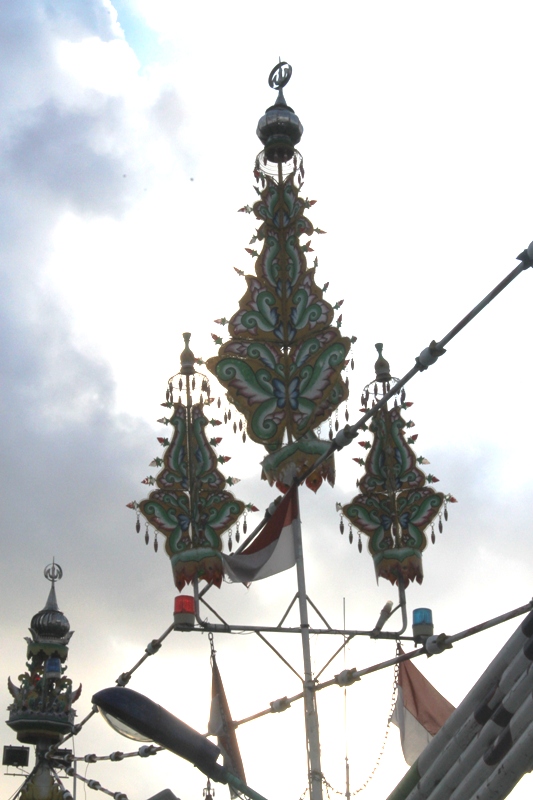 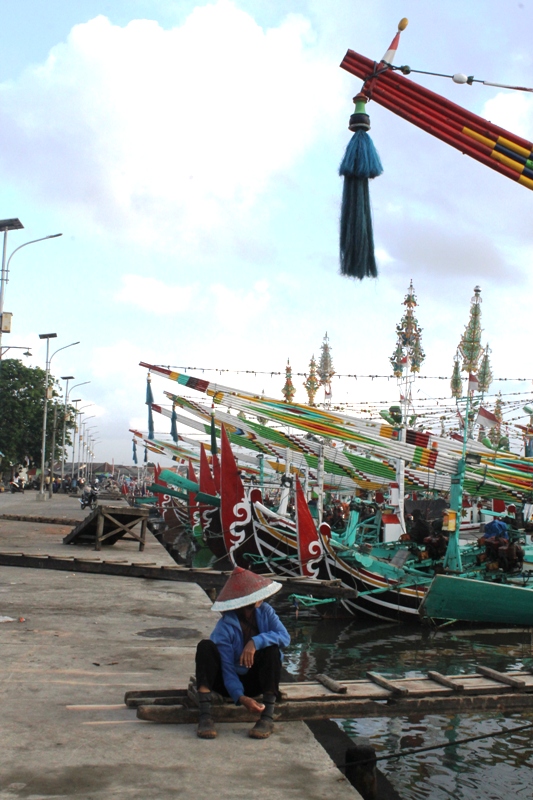 For fishermen in Muncar Fishing Harbor, Banyuwangi, the life is between the boat and sea.

In Muncar, people start the ceremony by preparing a githik in the house of the elder of Muncar. Githik is a small boat where the fishermen put all required offerings.  They also nicely decorate and paint the githik.  The people carry their offerings for the seas to the house.   A pawang (a spiritual leader for a traditional ceremony) leads the procession. It is known as ider bumi.

In the house, people put the offerings on githik. The offerings comprise of, among others, the goat head, varieties of traditional snacks and pastries, fruits, different kinds of  cassava, flowers,  gold fishing rods, and two roosters.  Each of these items carry a symbol.

A group of people in the house gather and recite the prayers all night long. In the morning, the fishermen come to the house. They wear their traditional outfits. Before proceeding to the coast of Muncar,  they carry the githik around the village .

On the coast,  a group of gandrung dancers welcome the githik  to the big boat. The decorated big boat sails to the spot where the fishermen offer githik  to the sea.

As I walked along the coast of this fishing harbor I was seeing many more interesting  protruding ornaments on the big boats. Some are eye catching,  like having the painting of Soekarno, the first president of Indonesia.  Off  on the sea  I saw some slereks that just finished their fishing. It is just an ordinary day for the fishermen of Muncar.  The boat and sea are like the bones and blood in their bodies.

Tips to get there

The best and most convenient way is by the car (rental). It can be as a part of the rental package. Leave as early as possible from Banyuwangi city to get an awesome view of the fishing harbor. It’s better to go there on the dry season.