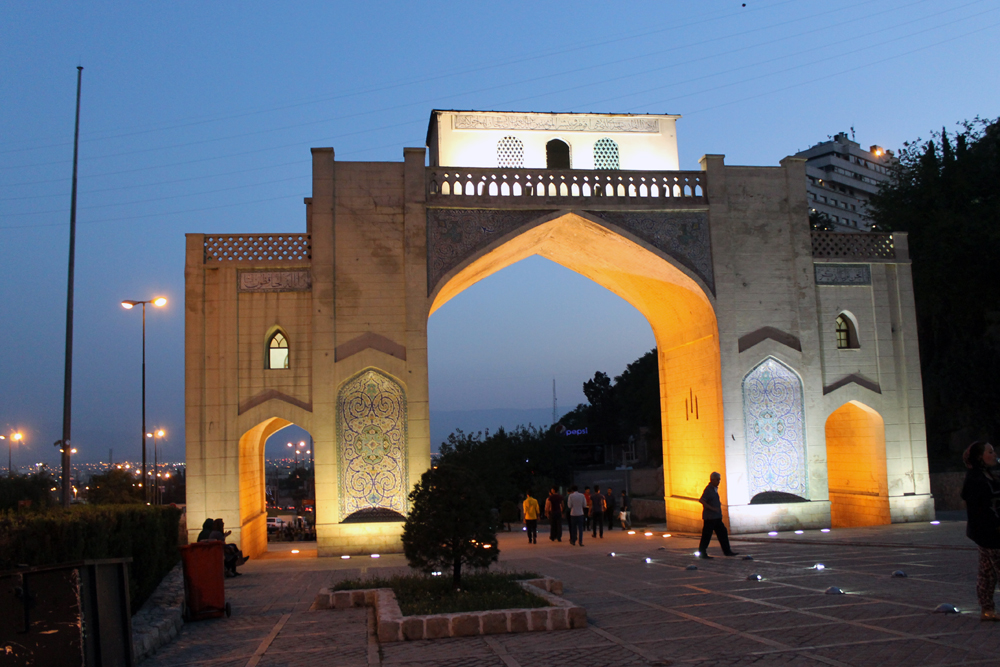 It was about 30 minutes before my bus left for my next destination, Yazd. The car that I rode arrived in the bus terminal’s parking lot.

“I go with you to the bus,” said Maryam who just stopped the car’s engine.

“I’ll wait here,” Mitra, Maryam’s younger sister, who sat on the back, added.

We all got out of the car.

“Goodbye, Iji. Please take care,” said Mitra as she was hugging me. I couldn’t say any words as my throat choked a bit. I tried to hold my tears from falling.

Then, Maryam and I walked to the bus that would transport me to Yazd. I gave Mitra my last look. Onboard, Maryam and I said goodbye. As I was hugging her, I burst into tears. I was sobbing. Maryam looked worried to see my tears. “Don’t worry. Have a good journey and see you, again,” she grinned. Though her last sentence sounded cliche,  in fact, it did happen–we met again three years after.

I waved her goodbye for the last time. It was really a mix of feelings to say goodbye to the two sisters who have accompanied me in Shiraz. I shed my tears and tried to control myself.

Although I was glad that I could continue to my next destination, my around 48-hour time in Shiraz with the presence of Maryam and Mitra shook my emotion.

Friend of A Friend

On my first day arriving in the capital of Iran, Tehran, in 2014, I contacted my old-time Iranian friend, Mohsen. He asked for my 2-week itinerary. I told him the cities that  I was going to visit. As I mentioned Shiraz he said that he had a friend in Shiraz who could help me. Then he gave the contact number and email address of  Maryam. “Give her your flight details. She will pick you up at the airport,” said Mohsen calmly. I was kind of doubtful as I didn’t know Maryam and we had never been in contact before.

Despite my doubtfulness, I wrote Maryam an email and gave her my temporary Iranian mobile number. I also told her my flight details to Shiraz.

I arrived at Shiraz airport when it was already dark. Shiraz is situated in the southwest of Iran. It is the capital of Fars Province and the fifth populous city in Iran.

In the baggage claim area,  I saw a slim, tall girl–like in the photo Maryam sent–approached me.

“Iji?” her tone inclined as she was just two steps closer to me.

She nodded.  Smiling, we shook hands.

Gosh! It was unbelievable to me. I was picked up by a friend of my friend in a new city. We didn’t know each other but it was just like a click as soon as we met in-person.

Maryam came with her sister  Mitra who was waiting in the car. And they were ready to take me to the hotel. We had some introductory conversation. Maryam was a chemist and worked at the university as a lecturer and Mitra was a university student. They are both adorable girls.

Maryam, myself and Mita in hotel lobby in Shiraz, Iran

The Aryo Barzan Hotel that I stayed in Shiraz was the best hotel I had stayed in my entire trip to Iran.  The next morning I was traveling to Persepolis, which was located outside Shiraz. It was followed by the visit to the tombs of Hafez and Saadi. Here is my story about Hafez and Saadi: A Pilgrimage for Poetry: My Trip to Shiraz. Both are very respectful  Persian poets from Shiraz.  The trip had been arranged by my tour guide in Tehran.   By the afternoon I was back at my hotel. Maryam texted me that she and Mitra would take me around Shiraz.

“Please send my best regards to her.”

I was lucky to meet Maryam and Mitra. Going out with the locals, I could taste the local life well. They took me to the big, neat, and very family-friendly Eram Garden. Using Maryam’s  ID card, I could enter the garden for free.

Maryam (left), myself, and Mitra in Eram Garden, Shiraz, Iran

“While in Shiraz, you should try Shirazi ice cream,” Mitra grinned.

The last time I tried the traditionally made ice cream was in Damascus, Syria. It was the best ice cream I have ever tasted.  So, here I went again.

The Baba Bastani ice cream is well-known across Shiraz. I didn’t doubt it because as we got to the kiosk, there had been a long queue. The loyal customers came in groups of friends and families. I really saw a normal life. Especially in Shiraz, I could sense a relaxing atmosphere.

I must tell the ice cream was so delicious with pistachio on top, and I also tried faloodeh. Faloodeh was considered another of Shiraz’s sweets. It was made of rice noodles and spiked with rose water and lime.  After tasting the genuine faloodeh, I never tasted another faloodeh as good as it was.

Faloodeh (left) is the typical dessert of Shiraz, Iran

To seal the evening, they took me to see the skyline of Shiraz. The best spot to see the skyline was at the Quran Gate located in north Shiraz.  There used to be the hand-written Quran, Muslim’s holy book, kept in the small room on top of the gate.

The Shirazis come to Quran Gate during the dusk. It is a wide boulevard that has become a public area for picnicking. There are statues of  Persian poets and a restaurant on the foot of the hill.  Many people come with family and friends. The darker it gets, the more people come.   The Shirazis are very social, people greet each other.

We were there for a while taking pictures and enjoying the twilight before the sky became completely dark.  On our way to the hotel, Maryam and Mitra made a plan for tomorrow–my last day in Shiraz.

Maryam needed to go to the campus, so it was Mitra’s turn to accompany me in the morning.  We’d go to the Citadel which was walking distance from my hotel.

Mitra and I in Shiraz, Iran

“Iji, Mom said next time you are in Shiraz, don’t stay at a hotel, you stay with us,” Mitra seriously said as we walked to the Citadel.

“That was very kind of your mom,” I was touched by heartful intention–I finally met their very hospitable mother three years later.

I spent my last morning in Shiraz at Karim Khan Citadel with Mitra. It is a huge area of 4,000 m2 land. I had surprises to see the beautiful architecture of the Zand Dynasty. Shiraz was the capital of the Zand Dynasty in Persian history. Then, I told Mitra that I’d like to visit the shrine.

She took me walking to the Shah-e-Chiragh, one of the shrines in Shiraz,  through the alleys passing the local markets. I was amazed to see the real local market where tourists didn’t go. One market alley leads to the shrine. As soon as we arrived at the shrine, there was an issue that women needed to wear socks to get inside the shrine.

“Wait here, Iji,” Mitra hurried and she lost in the market.  Just ten minutes later she came back with the new socks for both of us.

Back in the hotel, I packed for checking-out. The sisters would pick up at 2 pm, they would show me the Shiraz Bazaar before going to the bus terminal.  The sisters gave me another surprise. They brought a bowl of sweet cold drinks made by their mother including the glasses as a treat for me. I was speechless with the hospitality of their mother. We stopped for a while to enjoy the cold drinks.

Maryam took me to Shiraz Vakil Bazaar, one of the tourist destinations of Shiraz. It was a traditional market with many kiosks selling anything you seek, like jewelry, textiles, food, souvenirs. I liked the atmosphere as there is no kind of such a market in my country. “I went here sometimes after working, just for window shopping,” Maryam said. “Lucky you ,” I responded.

Maryam and I in Vakil Bazaar Shiraz, Iran

I must admit that I really had a wonderful time in Shiraz with two girls who were first strangers but later became my dear companions during my trip. They showed the genuine hospitality of Shirazi people that I would never forget.