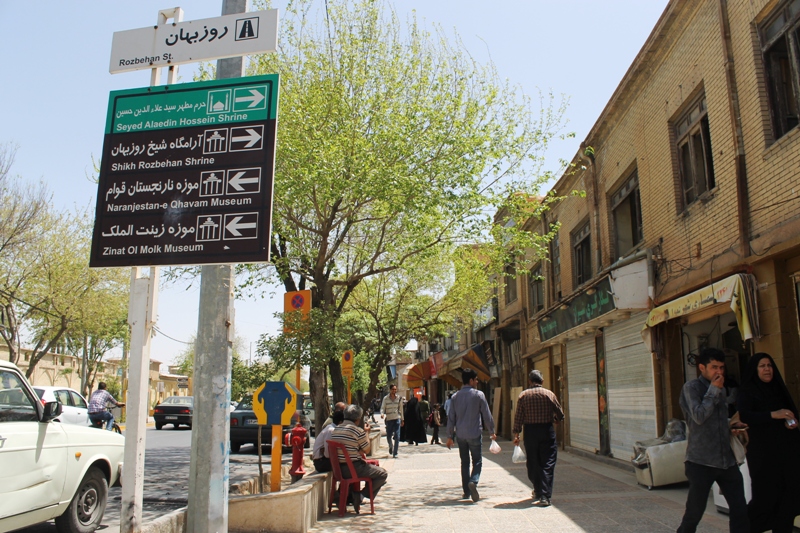 Speaking of the Qavam al Mulk family, we need to flash back to the years of the Zand Dynasty of Persia Kingdom.

The Qavam al Mulk family was descendants of Hajj Ebrahim Khan Kalantar. He came from a wealthy merchant family that later had political  affiliation with the government.  Hajj Ebrahim Khan Kalantar had influence in the government of Zand Dynasty.   He was a vizier (councilor) and kalantar (a kind of governor) of Fars in the Zand government. However, Hajj Ebrahim collaborated with Mohammad  Khan  Qajar that contributed to the end of the Zand Dynasty.  He helped Qajars emerge into the throne. Mohammad Khan Qajar became the first king of the Qajar Dynasty in the late 18th century. The king moved the capital of the kingdom from Shiraz to Tehran. When governing Fars, the now Ali Akbar Khan Qavam al Mulk built the complex of garden and residential house in the 19th century.  It was later called Qavam Garden. It took ten years to build the entire complex from 1879 to 1886.  The architecture  of the  construction was Mirza Ibrahim Khan. It was his fourth son, Ali Mohammad Khan Qavam al Mulk, who finished the construction. As the Qajar Dynasty ended, Persia was ruled by the Pahlavi Dynasty. The king, Reza Shah Pahlavi, abolished the title  Qavam al Mulk in the 1930s.

The Qavam Garden that is popularly known as Narenjestan Garden is located on the Loft Ali Khan Zand Street of Shiraz. I paid a 300,000-Rial ticket to get access to the entire complex.

As I stepped to the entrance gate, my eyes caught the middle terrace of the mansion in a distance.  The terrace was facing me like in a straight line. The complex covers an area of 3,500 square meter.  In the middle of the big  complex is  a rectangular garden fenced by low poles. Flowers  from the colors of lilac, white, yellow, pink carpeted the ground inside this garden.  A small water pool lengthens along the garden in the middle.  On the sides of the garden are pedestrian paths that are shaded by sour orange trees. From these trees, the name Narenjestan was generated.  Narenj means orange in Farsi. Like in other Persian gardens, Qavam or Narenjestan Garden has the elements of water, fountain, trees, and flowers. 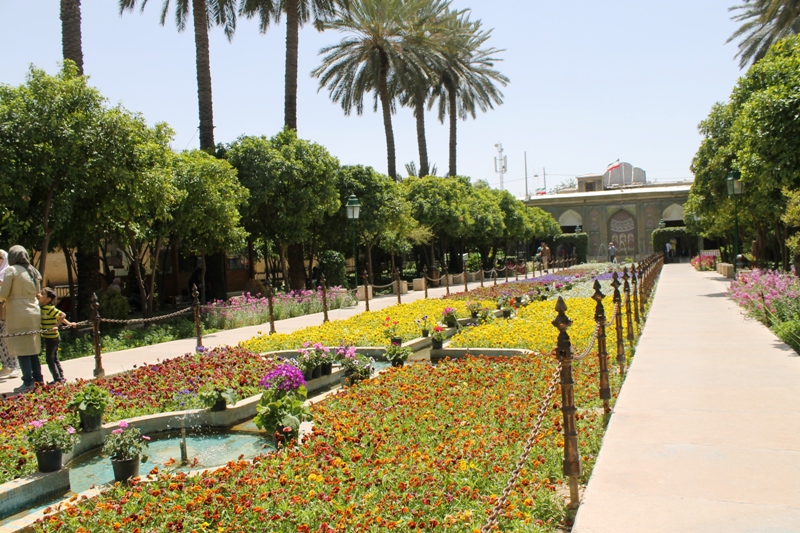 Our eyes were captured by the beauty of the blooming flowers in the garden. Not only us, other visitors also could not resist to take pictures of the garden. It was pretty. We walked to the mansion while we were enjoying the atmosphere in the garden on the cloudless day.

We reached the end of the rectangular flower garden. And there was a small pool with a fountain.  The pool was  situated just in front of the terrace of the mansion.  Facing the terrace,  I held my breath upon seeing the meticulous  mirror works  and  gorgeous  paintings on its ceiling. 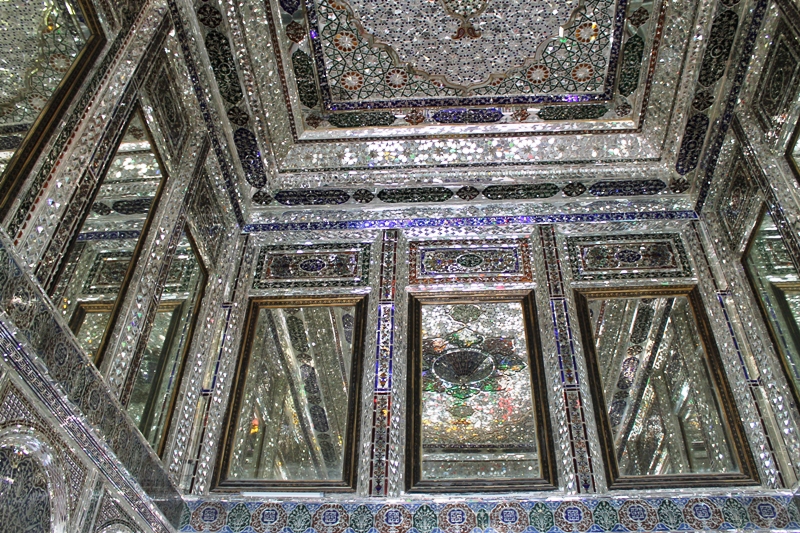 The second floor of the mansion was the guest rooms. The fantastic part of the room  is the wooden ceiling that was delicately painted with flowers and birds figures. All rooms had a perfect view of the pool and flower garden. 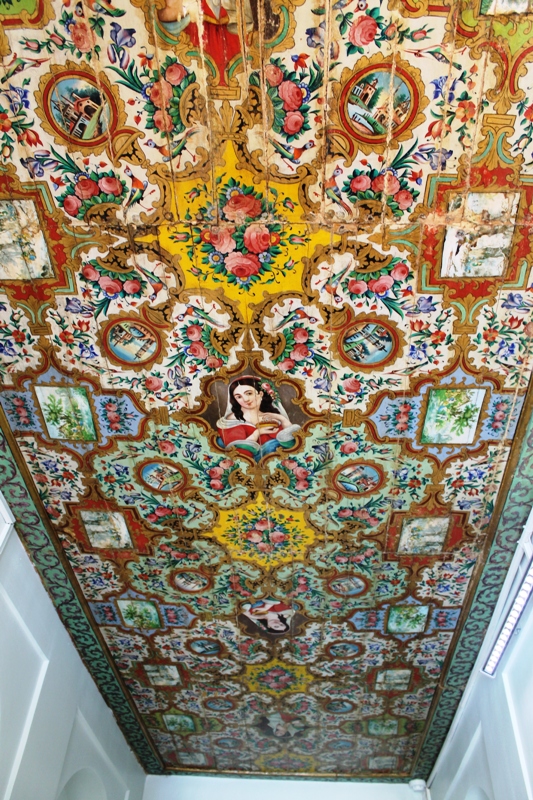 The family of Qavam al Mulk must have been very wealthy  considering the size of the  garden and the extravagant decorations of the mansion.  All the artistic works in all rooms should have been made by skilled and best artists of the time. 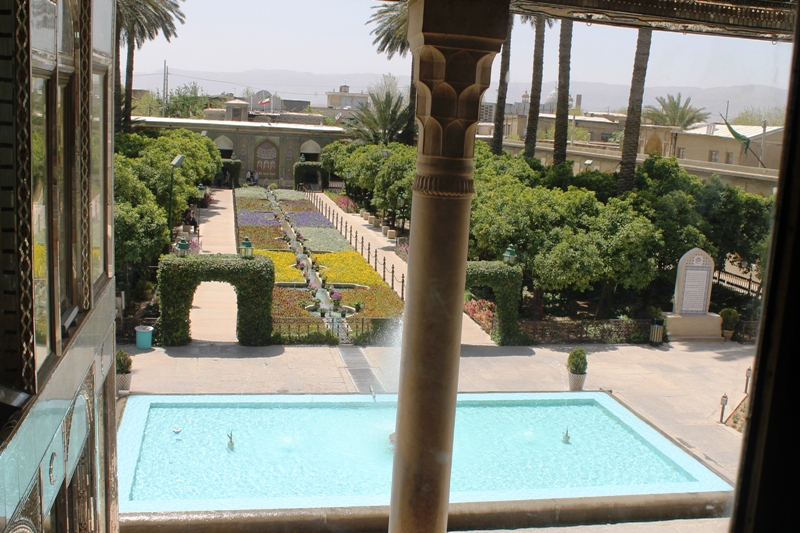 The mansion used to be an office for administrative issues. It was also a meeting place for the nobles and high ranking people in the kingdom.

In fact, I would love to stay longer in the rooms in the mansion, but again I should consider the timing. Then, we moved to the west  to visit Khane Zinat al Mulk or Zinat al Mulk house. This was the private area of the family.

The first floor of the house is now changed to be the Fars Museum of history. The museum displays important figures from Fars Province in terms of wax statues. It is worth visiting the  museum to learn about prominent figures from Shiraz, ranging from Hafez to the Qavam family. Zinat al Mulk House had a large  inner  courtyard and one main pool.  The house had 20 rooms decorated with mirror works and paintings.  The rooms were connected to one another.  The lower part of the room had a marble wall while  the upper part was plastered with glamorous mirror works and traditional painting. The windows had colorful glasses to soothe  the eyes from the sun lights during the summer time. Its doors were made of the woods of walnut trees.  All parts of the house had decorations either  artistic plasters, mirror works, paintings or carvings. All rooms were really charming. I felt as if I were in a palace of a fairy tale. I continuously clicked my camera just because I didn’t want to miss the beauty of this former residential house. 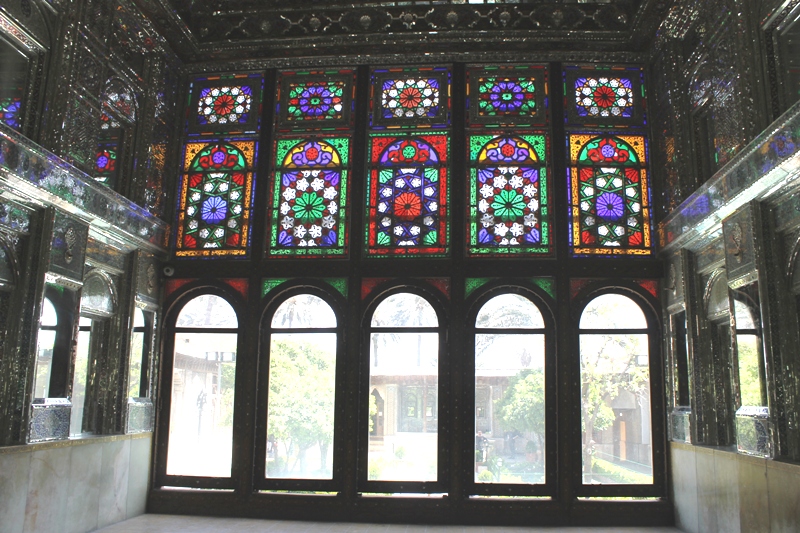 I was really satisfied with my visit to Qavam Garden. The whole area just reconfirmed the artistic works of Persian arts and culture that were embodied in a house.  And the most affluent people at that time spent their richness to decorate their residential houses. “Iji, let’s have a bite. It’s late already,” Maryam reminded me of the lunch. Oh, I almost forgot the time.  We spent quite a long  time in the  Qavam Garden.  We left the Garden. Then, Maryam took me to a fast food restaurant to try an Iranian burger. It was good. We made a quick lunch as we didn’t want to miss our next destination, the shrine of Ali ibn Hamzah. It was late afternoon already.  We drove to Hafez Street where the shrine of Ali ibn Hamzah was situated. From outside, I could see the bulbous dome of the shrine.

In my first visit to Shiraz in 2014, I went to Shah Cherag, the shrine of Ahmad and Muhammad, the brothers of Imam Reza, the 8th Imam of Shiites. In my second visit to Shiraz, I just liked to visit one religious site, and Ali ibn Hamzah shrine was an option.

Ali ibn Hamzah was the nephew of Imam Reza who lived in the late 8th century. He left from Madina in Hijaz (current Saudi Arabia) to Khorasan, northeast Iran, to help his uncle Imam Reza. Ali ibn Hamzah was prosecuted by the Abbasid caliph at the time and he fled to Shiraz. In Shiraz, he was found and killed. His body was buried in Shiraz.

The entrance gate of the shrine led to a spacious inner courtyard that had a small pool in the middle.  In comparison with the Shah Cherag complex, the shrine is smaller and less crowded. 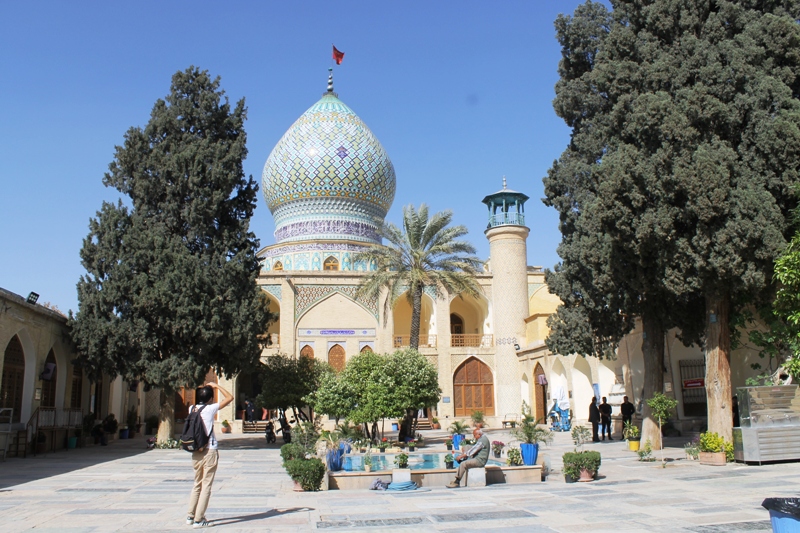 The shrine of Ali ibn Hamzah was open to anyone from any religious backgrounds.  As I was there, there were other tourists who came to visit the shrine. 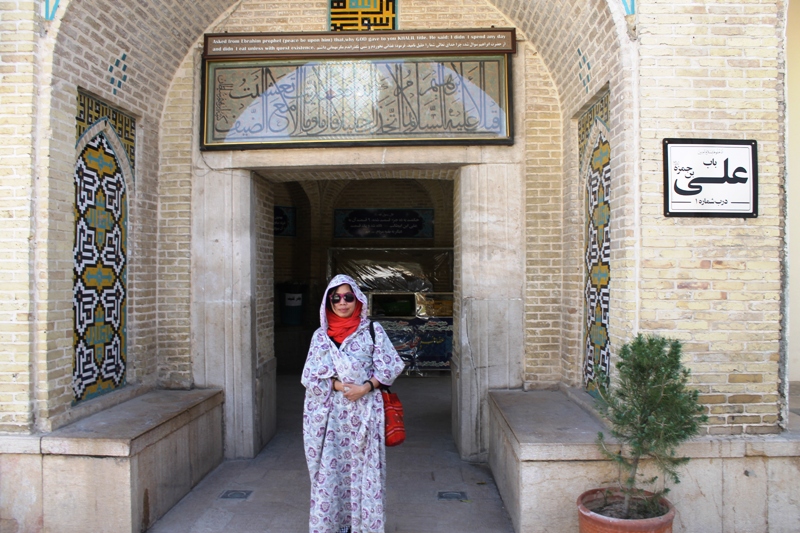 I had to put on chador to be able to enter the shrine that was located inside the building with a bulbous dome. Women visitors had a different entrance. Inside the shrine, some women performed their prayer. It was fine to take photos inside the shrine as long as it would not disturb those who were performing their rituals and no flash was used.  The mirror arts inside were  aesthetic. They gave green color tone. The chandelier that hung in the middle and the ventilation in the dome gave glittering effects in the room. It felt peaceful inside. After staying a while inside the shrine, we left. The shrine complex was not a tomb only, there were also other religious activities going on there. In the courtyard, I saw a group of school girls who were visiting the shrine with their teachers. I took some shots with them. 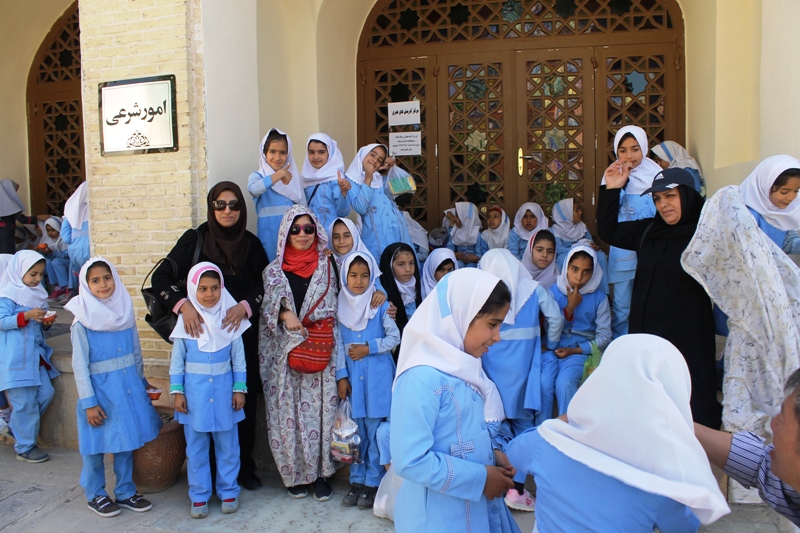 The shrine visit was our last destination of the day.  We planned to visit Hafez tomb the next day,  on my last day in Shiraz. It was really a full day for me, and I was happy to be entertained with the mind blowing art works of Persian art and culture.